Springsteen played York College of Pennsylvania before he became ‘The Boss,’ Part II 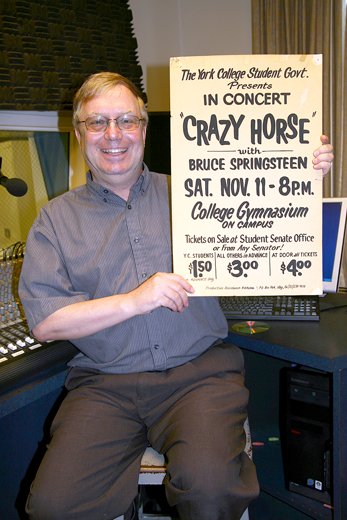 Tom Gibson from York College of Pennsylvania holds evidence that Bruce Springsteen, indeed, played York County, in 1972. ‘I was onstage with Bruce almost forty years ago as the college tech rep for the concert. The concert was performed in Gym “A” and attended by almost 2000 students and community members.’ He pointed to an article in the Lancaster Sunday News as further evidence: Springsteen was once second-bill at $4 York College show. (See closeup of poster below.) Also of interest: Who performed at the York Fair in the year (fill in the blank)? (Springsteen didn’t.)

Tom Gibson and other York countians responded to memories from former York College of Pennsylvania President Robert Iosue about Bruce Springsteen’s concert at the college in the early 1970s.

Tom emailed: “He DID receive a very warm welcome from the community and performed two days later on the Tonight Show with Johnny Carson where he commented on his first public performance outside of New Jersey. ‘If the reception I received at York College is any indication, I think I will make it big.’ ”

“The original poster pictured in the article is hanging on the wall in
front of me as I type.”

Eric Lowe also emailed: “I heard that he played at the old 615 Night Club on East Market St. I kind of doubt that. Actually I think York College is more likely.”

Nancy Shue also commented on the second gig at 615:

“I was at the concert when Bruce Springsteen played at York College… . The picture of him playing is in the yearbook. He also played at the 615 where he got booed.”

So no question Springsteen performed at York College. Looking for a little more about 615. Did he really get booed?

– Who was McKay of York College McKay Hall fame?

– How a bird sees the original hub of York College 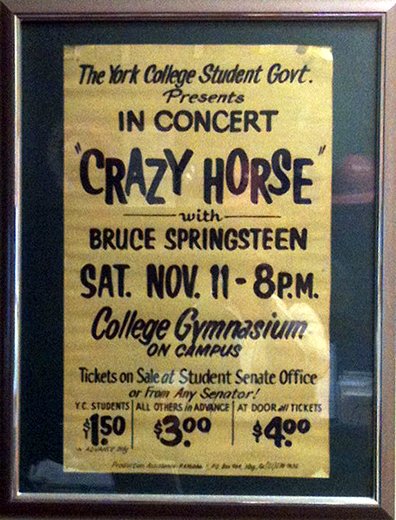 Janet Strickhouser, who supplied this photograph, wrote:  ‘Dr. Iosue’s account of Bruce Springsteen playing at York College in 1972 is correct. A poster of the event is hanging in my office at the college. Bruce was the opening act for Crazy Horse. Note the ticket prices. I saw Bruce and the E Street Band on September 22, 2012 in New Jersey. Tickets were $100. Times have changed but Bruce’s music just gets better and better.’