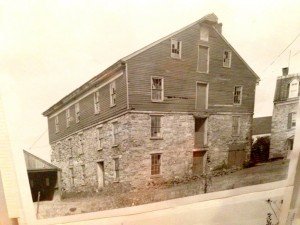 The farmhouse partially seen to the right in this York County Heritage Trust photograph is believed to be the Springettsbury Township farmhouse targeted by a demolition team recently. For years, the farmhouse, part of the Diehl’s Mill and later as Spring Valley Peacock Farms, stood alone near where Sherman Street crossed Interstate 83.  Also of interest: One photograph teaches lesson about change in York County and A York County story: Sprawl leaves problems in its wake
.

When it stood, the Peacock Farms house told a story about York County. It represented a past of agriculture and milling.

And then it was challenged by the building of Interstate 83, which took its mill, brought sprawl and caused warehouses and trucking terminals to grow up in its former fields.

The demolition of the house tells a current story of a county with a short memory.

With so many new residents brought here by the interstate, memories of such landmarks are diluted and the  value a community attaches to  these old buildings is diminished. As these landmarks  are torn down, they’re replaced with less durable structures.

In 20 or 30 years, those new structures are viewed as out of date and are susceptible to landfilling and rebuilding, as a colleague put it recently. The West Manchester Mall, built in 1981, is an example of that.

What is in the future? If these landmark buildings come down – historic or not – there is a loss of a sense of place. So if we don’t value our landmarks, we face a future of sprawl, a loss of identity and a county in which heavy-handed commercial market forces dictate how we live.

Having said this, the Peacock Farms house appeared beyond reclamation. It probably could not have been preserved.

If it had been shored up years before, then motorists along 83 would have been greeted with a symbol of our rich past, to balance out the structures lining the interstate that suggest impermanence and, well, a county lacking an appreciation for green space and beauty.

Excerpts from a York Daily Record/Sunday News’ story on the farmhouse’s demolition (2/23/13) follow:

The old wood and stone farmhouse tucked just inside the entrance to Kinsley Properties’ Center Point Business Park appeared nothing like the nearby modern offices.

It seemed to hail from a different era — a time when Interstate 83 didn’t exist and local roads were traveled by horse-drawn carriages.

That farmhouse, situated near North Sherman Street and Route 30 in Springettsbury Township, once stood as the cornerstone of a roughly 200-year-old farm known initially as Diehl’s Mill and later as Spring Valley Peacock Farms.

Recently, workers demolished the farmhouse and removed a marker, wiping away any visible trace of the farm.

Kinsley does not have any additional construction plans at the former farmhouse location, said Barbara Sardella, vice president and general counsel for the company, in an email.

“The uninhabitable house did not contribute positively to the industrial use of the property and had become a safety concern,” Sardella said.

The company determined the house to have no historical significance before tearing it down, she said.

“For the past few weeks, (Terrence Downs and I) tried to plan a trip to go to the property and take pictures,” said Blake Stough, founder of Preserving York, a community group dedicated to York County history. “But, Terry and I never got that chance. I need to find out a way that, if something like this is going to happen, to let people know so that they can pay their last respects and say their final good-byes.”

The farm traces its roots back to 1739 when John Adam Diehl bought 300 acres and built a grist mill, according to records from the York County Heritage Trust.

In 1755, Peter Diehl, John Adam Diehl’s son, took over the operation and restored the mill.

About 135 years later, the house and mill passed from the Diehl family to William C. Hively and his brother, according to historical records.

The mill was torn down in 1960 to make way for Interstate 83, according to historical records.

Although a local landmark, the farmhouse would not have been eligible for national historic preservation, according to information from Historic York on file with the York County Heritage Trust, the YDR reported.

– Old Gettysburg Cyclorama building: Visit this round landmark while it still stands 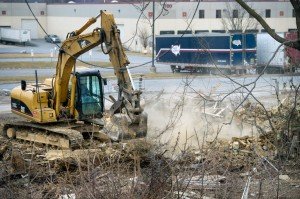 Peacock Farms comes down as trucking and other nearby businesses go on as usual.