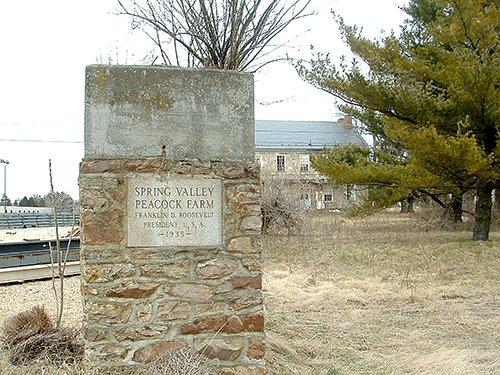 The marker indicates the name of the old farmstead that stood behind it. That is, until recently. The old house at North Sherman Street and Interstate 83 came down recently. Unless I’ve missed it in all the coverage, has the peacock part of the farm’s name and the Roosevelt reference been explained? (See more photographs below.) Also of interest: Springettsbury farmhouse provided a telling, troubling story about York County, Part I

Josh Stahlman is a student of history and took particular interest in the demolition of the stone house so familiar to motorists along Interstate 83 or North Sherman Street: Peacock Farms.

Like many, Stahlman was dismayed to see the old house come down. 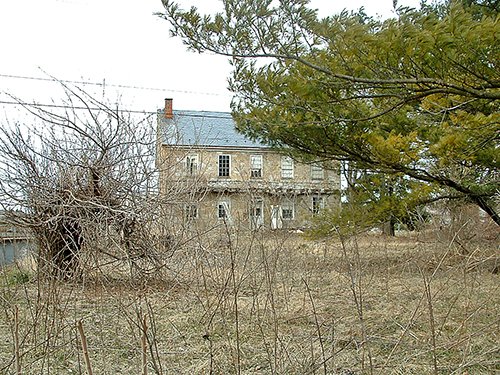 This is how many people remember the Spring Valley Peacock Farm in recent years.

About 2006, Stahlman thought seriously about buying the house but did not have the resources.

“It is very sad indeed,” he wrote.

Another York countian with intense interest in the house wrote a letter to the editor to the York Daily Record/Sunday News. (I guess that’s me.)

Years ago, she lived there.

When Manheim Township’s Anita (Dahr) Woods learned about its demolition, it was a very sad day for her:

“Not only was that house part of York County history but it was part of my family history as well. I lived in that house from 1941 until 1954 along with four of my siblings who were born there. The land around the house was a working farm along with dairy cows. My grandparents farmed the land in the 1930s until my parents took over the farming in 1941 until 1954.

“According to the large stone at the peak of the roof facing Sherman Street, the house was built in 1820 thus making it 193 years old. The date was carved into the stone and in recent years was hidden from view by vines and a tree.

“I’ll bet there aren’t very many houses of this age remaining in York County.

“I cannot understand how the present owner could see no historical significance in keeping the house, especially since they have no plans to build on this small parcel of land. Perhaps this once gracious old house could have been restored and/or repaired for use as office space or as a retail sales store of some sort. At least a special part of York County history would remain standing instead of being lost forever. ” 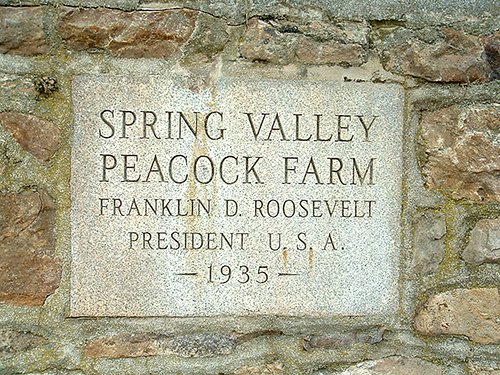 The Roosevelt reference is puzzling. As far as is known, Roosevelt never visited York County as president. His presidential train passed through the county but never stopped. The sign has been saved, and it will be interesting to see how or whether it will again go on public display. Also of interest: This working list documents presidential visits to York County.