Spring Garden Band: ‘It’s like being in the room with history’ 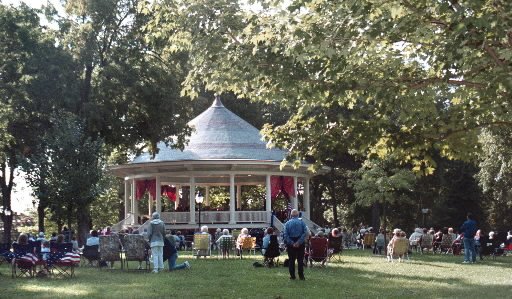 The York, Pa.-based Spring Garden Band plays here at the rehabbed Farquhar Park bandstand in York. The 153-year-old group, with roots as a regimental band during the Civil War, will play at the bandstand again on Sept. 7. For a photo of the band in 1861, see below. Background posts: Long Level and Pleasureville fielded bands?, Community bands play on and Parade Music Prince Roland Seitz: From Shrewsbury to Friday Night Lights.

Members of what became the 87th Pennsylvania Regiment’s band, the Spring Garden Silver Cornet Band, started playing together in a carpenter shop in Freystown, now the eastern part of York, in 1855.

In fact, the band’s first cornet player was William Frey.

The band marched to war with the 87th in September 1861, and the U.S. Department of War discharged members in 1862.

A reformed band played on after the war, and plays around York County today… . 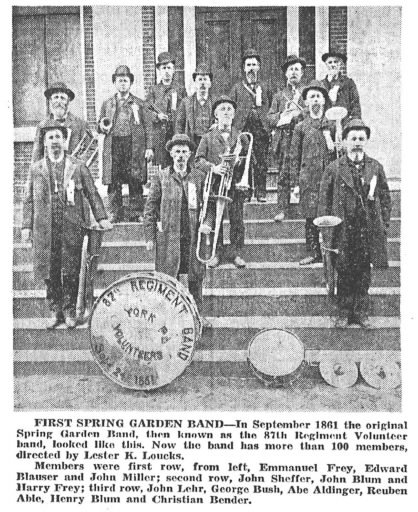 The caption in this undated newspaper clipping identifies Civil War-era band members.
At a recent concert, the Pullo Center swallowed up the aging band, its old-time playlist and its audience of 200. Here’s hoping the band overcomes the challenges facing so many other venerable York County community organizations. (See York County civic, service groups fighting for lives).

A York Daily Record/Sunday News story (5/18/08) tells about the iconic York-based musical group’s schedule for this summer, its 153rd:

Backstage, a stand displayed sheet music with quarter notes highlighted in neon yellow.
Nearby, an ancient gold spray-painted Royal typewriter and candelabra set on a table as percussion maestro Michael Carl prepared for his solo.
Carl, of Steelton, has played with the Spring Garden Band for nearly two decades.
On Sunday at Penn State York’s Pullo Family Performing Arts Center before an audience of more than 200, Carl and the band performed “The Typewriter.”
On center stage, he clicked the keys on the typewriter in rhythm with the band’s music, returning the machine’s carriage when he came to the yellowed notes.
The Spring Garden Band has been performing for more than 150 years. The band played at two presidential inaugurations, state fairs across the country and recorded under contract with RCA.
The band’s director, Jeff Shaull of Chester County, recalled hearing the band for the first time when he was in about eighth grade at Red Lion Area School District.
Shaull, who plays French horn, joined the Spring Garden Band when he was a senior at West Chester University.
He said the quality of the musicians attracted him to the band, which voted him in as director in 2003.
Shaull said tradition is the secret to the band’s longtime success.
The band’s youngest members are still in high school and play alongside seasoned musicians, including Rodney Sechrist, 68, who joined the band when he was 8 years old.
“It’s like being in the room with history,” Shaull said.
Manchester Township resident Gary Morton, a percussionist, has been a member of the band for nearly 30 years.
“We’re helping to keep it going,” he said.
Springettsbury Township resident Treva Burg and her granddaughter, Erin Burg, 19, sat in the opera seats and listened to the performance.
Treva Burg’s son and daughter-in-law, Stephen and Susan Burg – who are also Erin Burg’s parents – play in the band’s horn section.
Treva Burg’s husband, Philip – who died a couple of years ago – played string bass in the Spring Garden Band for 60 years, she said. Hearing the band’s music brings back many years of memories of her husband, she said.
“I remember him standing up there with the bass fiddle on the end,” she said. 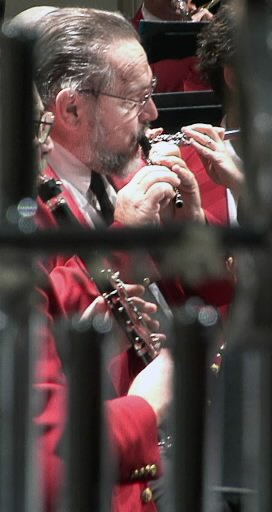