Spirits put Foustown, the ghost town near Glen Rock, on the map

This drawing shows Springfield Township’s Foustown, a company town built around the making of whiskey. This is not to be confused with the Foustown near Cousler Park in Manchester Township, north of York. Lightning recently mortally wounded the smokestack, the most visible vestige of the settlement’s past. The smokestack is not the one pictured here. It was built in World War II, but never used, to produce alcohol. (See photos below of the damaged stack.)  Also of interest:  Those 1912 drivers and other stories around Glen Rock, Pa. and Pottery put the other Foustown, the one in Manchester Township, on the map and With all those still, the York County hillbillies?

‘It took all the bricks off the top.’

“It’s going to have to come down,” a township supervisor told the York Daily Record/Sunday News.

Many people identify the smokestack because of its white-bricked “Foust” on its side. 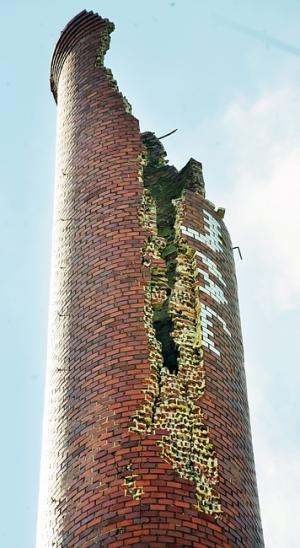 The damaged smokestack with its familiar white-bricked ‘Foust’ on its side.

The YDR story, Foust distillery smokestack to come down, tells about a neighbhor who is collecting the white bricks that have fallen since the storm.

While this Foustown can be confused with its northern neighbor by the same name in Manchester Township, I remember them this way:

Southern York County’s Foustown made the whiskey that could be stored in Pfaltzgraff jugs made in Manchester Township’s Foustown. All this is good fun. The primary products of the two towns were made in overlapping periods – in the mid-1800s – but only a bottle and jug expert could ever attest to whether the two produccts overlapped in the same container.

– Foustown now a ghost town: Raid there once netted 300 barrels of quality firewater

– Carrie Nation in York, Pa.: ‘I told them that they were maintaining a drunken men’s club’ 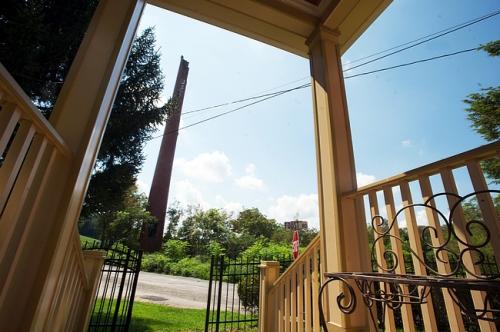 Another view of the damaged stack. What was left standing in 1979 in founder William Foust’s honor will now come down.