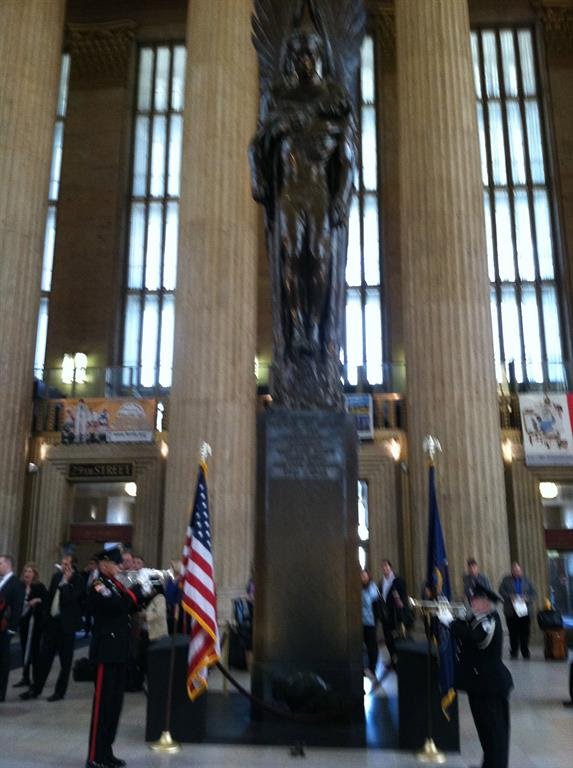 A ‘Spirit of  ’45’ observance has taken place every August since 2011 at the  ‘Angel of the Resurrection’ memorial in the main concourse of Philadelphia’s 30th Street Station. ‘The Spirit of ’45 Day Express is traveling throughout America to help publicize Spirit of ’45 Day and promote interest in commemorating the 70th anniversary of the end of World War II next year,’ the Spirit of ’45’s website states. Here’s hoping it will stop in York, Pa. Also of interest: York County on its knees as fighting men storm Normandy beaches and York, Pa., had a famous V-J Day kissing scene, too.

I’ve included it here to help get out word about the group’s efforts to educate America about the major events that helped end World War II:

“Only today have I discovered your blogs while doing some research on the kiss statue in Florida. I am wondering if you are aware of the grassroots, non-profit campaign to ‘Keep the Spirit of ’45 Alive.’ We began in 2009 in time to celebrate the 65th anniversary of the end of WWII. In 2010, congress passed a resolution for the observance of Spirit of ’45 Day, the second Sunday in August, to align with the day President Truman announced the war was over and the world broke out into joyous celebration.

‘Since that time, we have had ongoing celebrations and continuous number of partners joining the campaign to ramp up to celebrate the 70th anniversary of the end of the war on Aug 14, 2015. Partners now include the U.S. Air Force, HISTORY, the National Parks Service, the Commemorative Air Force, U.S. Navy Memorial and even Mr. Seward Johnson to name a few.

‘I am fascinated by your blogs of the PA canteen USO services as it is so much like the loved story of North Platte in Nebraska.’

She then refers to a blog post I wrote about the possibility of recreating a USO dance in York in the old Pennsylvania Dutch Canteen.

“As you both learn about Spirit of ’45, you may want to join the planning of a celebration for 2015!

‘Spirit of ’45 has held wreath laying ceremonies every year at the 30th street station next to the beautiful sculpture. Our current Spirit of ’45 Express Tour stopped at the station for a tribute.

“Auston drove over to the 30th Street Station, in Philadelphia, PA to perform “Taps” with fellow BAA member Ed Bigler at the iconic ‘Angel of the Resurrection’ memorial that stands in the Main Concourse and has been the venue for annual Spirit of ’45 Day commemorative events every August since 2011.

“I encourage you to visit our website, and if I can talk with you to encourage you to work with AMTRAK at the station or with your local USO to ‘bring back those amazing 1940’s memories in time for the 69th and 70th anniversary of the end of WWII.’ I would be very happy! We could help to shine a national light on the precious memories you are working to preserve!

“And as we all know…….its for the youth! Our goal is to preserve the legacy of service, self sacrifice and commitment to service, unity and community of this generation so that their values will inspire future generations! I hope you are inspired by Spirit of ’45 and I hope something can be done to bring your blog stories to life once again!”

– Other stories and photos about York, Pa.’s, USO.

–Scores of stories and posts about York County in World War II.