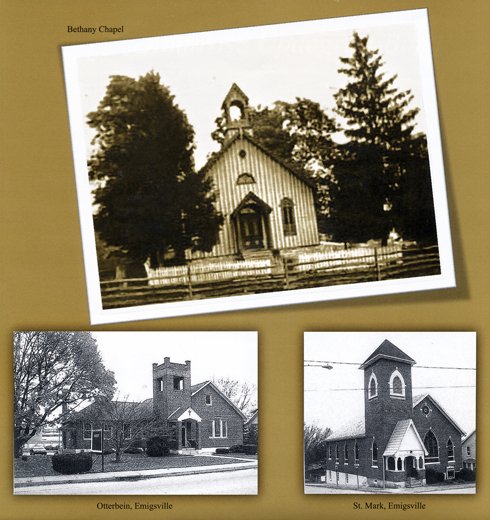 That’s Manchester Township’s Bethany Chapel at top. It was a union church, meaning that Lutherans and United Brethren congregations shared the building. Bethany divided to form St. Mark Lutheran Church and Otterbein United Bethren, now United Methodist, in Emigsville. This union church – made up of Lutheran and United Brethren congregations – was different from most in York County. The York County union church movement in the 1700s and 1800s largely consisted sharing between Lutheran and German Reformed congregations. But one thing is common. The union churches were German, indicative of the thrifty York countians who prefer to share a building rather than build two. These images come from the Manchester Township Historical Society 2013 calendar. For details about the benefit calendar, contact: ManTwpHistory@gmail.com Also of interest: Manchester Township calendar dedicated to history ‘digger’.

This prompted an interesting lesson from history-minded Tom about Steltz and other churches in and around Codorus Township:

“That is the first time that I have seen a photo from the 1936 construction. Note the date, note the times and economic climate….what great faith our forebearers had!

“It is odd that I have not previously seen such a photo because the congregation that I have served for the past 23+ years, Zion (Shaffer’s), was a partner with Steltz for 110 years as part of the Jefferson Lutheran Parish. The other partners were St. Jacob’s (Stone) Glenville and Trinity, Jefferson.

“Pastor William Ehrhart served this huge parish, followed by his son Rev. Kenneth S. Ehrhart, for a combined total of 67 years ending in 1969. (A)t St. Jacob’s, Pastor Ehrhart’s successor was only the fifth Lutheran Pastor since the Civil War. In other words, I’ve got a long time to go.

“Over a decade ago I acquired Pr. Kenneth Ehrhart’s personal, leatherbound copies of this parish newsletters. He wrote glowingly about the project at Stetlz and opined that the other churches in the parish ‘ought to build a proper church like the folks at Steltz.’

“During those years the services alternated between Zion (Shaffer’s) and Trinity on one Sunday and St. Jacob’s and Steltz on the succeeding Sunday. Of course, all of these (except Trinity) were ‘Union Churches’ meaning that German Reformed services were held on the opposite Sundays.”

He explained that each church building – a common in union churches – was shared by a congregations with separate pastors, treasurers, and other officers.

“The last Union Church in York County is St. Paul (Dub’s) in the center of Codorus State Park.

“As the late Paul Harvey would say, ‘That’s the rest of the story.'”

One of his wife’s great-great-grandfathers, Jacob Nonnemaker, was baptized at Steltz in the year 1800.

And he noted that with the recent shifting realignments of the various denominations it is interesting to note how the former Jefferson Parish has largely moved toward more conservative affiliations.

All this history goes to show the more common union church alignments – Lutheran and German Reformed – rather than Emigsville’s Lutheran/United Brethren matchup.

Some people have noted that people in Emigsville always likes to do things differently.

Interesting, on a recent trip to New England, I noticed a union church with a different stripe in Fitchburg, Mass.

United Methodists and United Church of Christ members were sharing the same building.  Perhaps these local congregations could no longer support separate buildings.

When it comes to union churches, we’ve come full circle. 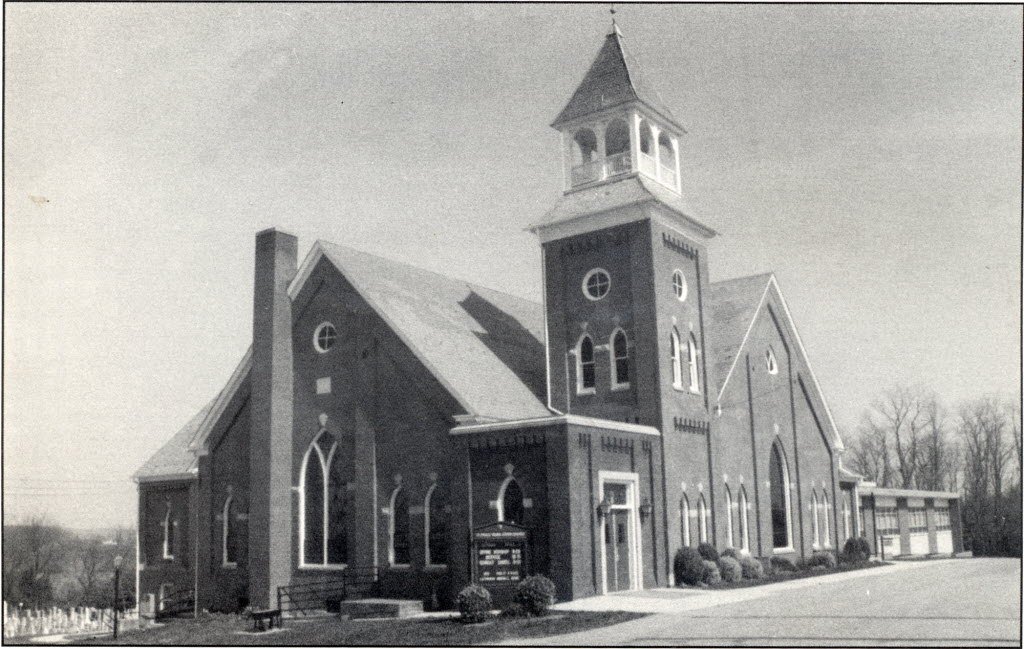 St. Paul’s ‘Dubs’ Church, on the bank of Lake Marburg in southwestern York County, is the last union church in York County.

Check out these stories and photographs about churches – past and present – in York County.