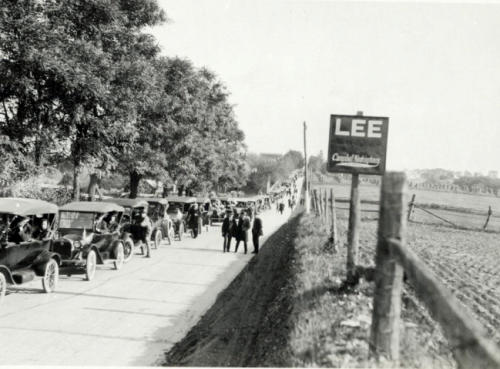 Some folks travel on Route 462 and Route 30 in York County, Pa., without a thought that they are moving on important ground in the history of the nation’s highway system. That road – still the most heavily used east/west route in York County – was the best Atlantic/Pacific route a century ago. This photo, submitted to the York Daily Record, shows that smooth transportation was a big deal in 1921. The Good Roads Jubilee was an event marking the paving of several important highways in southcentral Pennsylvania. That included the Lincoln Highway. Also of interest:  Littered sardine cans attest to the Lincoln Highway motorist and his appetite.

New Freedom’s Tom Davidson is a volunteer board member of the Lincoln Highway Heritage Corridor.

He wrote this piece, lightly edited and excerpted here, about the famed highway – Route 462 and Route 30 in York – for YDR.com and the York Sunday News:

On Oct. 4, 1921, up to 30,000 automobile enthusiasts gathered in Fayetteville to celebrate at the Good Roads Jubilee. The event was the culmination of months of planning and road improvements that created a 112-mile triangle of paved roads from Harrisburg to Gettysburg, past Caledonia west to Chambersburg and then north to Carlisle before returning to Harrisburg. The state-funded road project included construction of a state-of-the-art concrete highway between Gettysburg and Chambersburg that completed upgrades on the Lincoln Highway route over the mountains between Philadelphia and Pittsburgh. Miles of dirt roads were replaced overnight with smooth macadam and concrete, and people couldn’t wait to cruise this early transportation engineering marvel.

The day began with hundreds of motorists departing Harrisburg to Gettysburg where they were greeted by residents along the way in what became known as the longest automobile parade in U.S. history. Miles of dirt roads were replaced overnight with smooth macadam and concrete. The celebration’s highlight at Caledonia State Park was a pageant of historic vehicles and costumed re-enactors representing every era of American transportation history.

Long before Mahlon Haines built the Shoe House east of York in 1948, he participated in the pageant by donating a pair of oxen and cart along with other historic carriages for the festivities. After the pageant, the parade of motorists continued to Chambersburg to be greeted along the road all the way back to Harrisburg.

Today there are 12 state heritage areas in Pennsylvania, including the Susquehanna Gateway Region that promotes heritage tourism in York and Lancaster counties.

The Lincoln Highway Heritage Corridor and the Friends of Caledonia State Park  sponsored a Labor Day weekend event at the park in Fayetteville, Franklin County, to remember that big 1921 celebration in the Good Roads Movement.

“We had a good turnout of antique Model A cars, great entertainment with the Shippensburg Community Swing Band and Tri-State Jitterbugs and good participation in our two educational programs,” Tom Davidson wrote in an email. 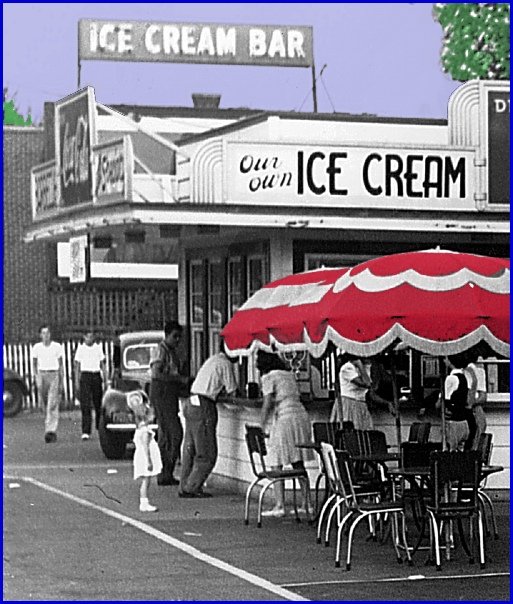 Melvin’s was one of many businesses along the Lincoln Highway in York, Pa. Interestingly, it was demolished in the late 1950s to make way for a larger highway – Interstate 83. YorkPast’s Stephen H. Smith tells its story in this post, which included this colorized photo and others: Melvin’s.