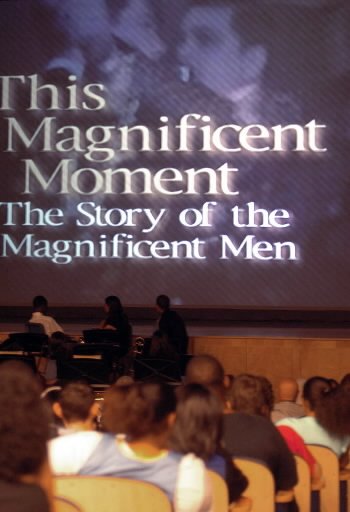 William Penn Senior High students view a trailer of ‘This Magnificent Moment,’ a documentary of the 1960s soul band The Magnificent Men, compiled by social historian David Zang of Towson, Md. The short film (see below) included samples of the all-white band’s music and interviews with band members who played black venues in Philadelphia, New York and Detroit.

The Mag Men was one of the most successful bands with ties to York in the 1960s.
They scored a recording contract with Capitol records. They played soul music in venues where black musicians were denied. And they played locations where black musicians were accepted including the Apollo Theater in Harlem, including a set backing James Brown.
Now, those seeking to re-stoke memories of the soul band can see a trailer of an upcoming documentary on the group at mag men. (If you want to discuss the group and trailer, see exchange.)
Dave Bupp and Buddy King, homegrown members of the group, were inducted into the William Penn High School Hall of Fame. Bupp, 64, graduated in 1960, and King, 59, graduated in 1965.
A York Daily Record story on their induction into the William Penn High School Hall of Fame in 2006 follows: …

When racial lines divided cities and towns across the country in the latter half of the 1960s, there was a group of young white men who could easily traverse those boundaries.
Race didn’t matter, Dave Bupp said. “I just wanted the chance to sing the music I loved.”
Tuesday, Bupp and Buddy King, members of the soul band The Magnificent Men, were inducted into the William Penn High School Hall of Fame.
“It validates my whole career,” said Bupp, 64, who graduated in 1960. “It means more to me than the Rock and Roll Hall of Fame. It’s something I wanted for a long time.”
King, 59, said after the ceremony in the high school auditorium that it was “a great honor.”
“It’s humbling more than anything,” he said. “It’s amazing how much the group meant to so many people.”
The Mag Men, as they were known locally, formed in the mid-’60s after club owners refused to book biracial bands, according to social historian David Zang of Towson, Md. The band, which included Jim Seville, Bob Angelucci, Terry Crousare, Tom Hoover and Tom Payne, sang and played the soul music that was the property of black musicians.
But because of its talent, the all-white band was readily accepted by black audiences, Zang said. And during that time period it was the only white band to headline the soul venues that made up the “chitlin’ circuit,” a string of theaters and clubs that catered to black clientele, Zang said.
The Magnificent Men went on to sign a recording contract with Capitol records and played the Apollo Theater in Harlem, including a set backing James Brown.
Tuesday, before offering Bupp and King for induction into the hall, Zang played a trailer for a documentary he is compiling of the band, “This Magnificent Moment.” The students’ applause, which had been polite earlier, was louder after the seven-minute film that sketched the life, sound and successes of the band.
The response was more clamorous after King closed his acceptance speech by crooning “Dear Old York High,” the song he wrote for his graduating class of 1965.
Bridgette Samuels, a William Penn senior who chairs the Hall of Fame committee, said afterwards that the Magnificent Men received numerous nominations from the public after the 2005 hall induction. She said the nominators included brief biographies of the band members and a CD with samples of the band’s music.
“I liked it,” she said.
“This is an honor beyond description,” Bupp said. “When they called and told me I was in, I broke into tears.”
The original members of the Magnificent Men disbanded in 1970, although with others in the lineup the group continued to record until 1987. The Magnificent Men perform twice a year at the York Expo Center to packed houses, King said.
“We had a lot of fun at a time of great chaos in this country,” he said.