How the ‘Barnes Dance’ allowed you to cross this York, Pa., intersection at any angle 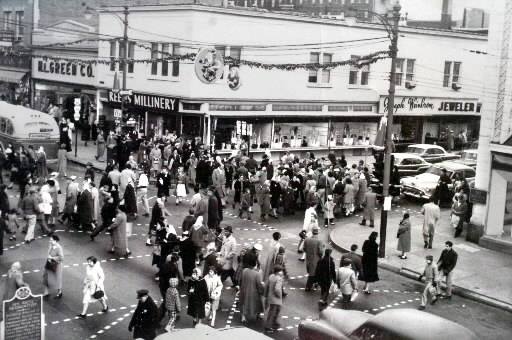 After I suggested that people were jaywalking at this mystery York, Pa., intersection, a YDR Facebook commenter stated: ‘This was NOT jaywalking. It was a short-lived intersection plan called “Barnes’ Dance” … . All vehicular traffic was stopped, and all pedestrian traffic was allowed to cross at any angle. It did not last long. Eventually the city returned to the customary configuration.’ Notice the complex crosswalk markings. But the History Mystery remains. What city intersection are you seeing here in this mid-1950s view? Answer and other photos of this spot: York City. Also of interest: Check out more quizzes and fun tests.

(If the photo doesn’t appear on your mobile device, click on the date).

History Mystery: Here’s a unusual scene at an always beautiful and graceful bridge in this region. The bridge is in a…

History Mystery: This beautiful square hasn’t changed much since a photographer captured this bird’s-eye view in 1992….

History Mystery: This photo of #YorkPa comes from a vantage point not often seen. Where was the photographer standing?…

Jim McClure – Scott Fisher, FYI (although I cannot get my hands around this man’s art)