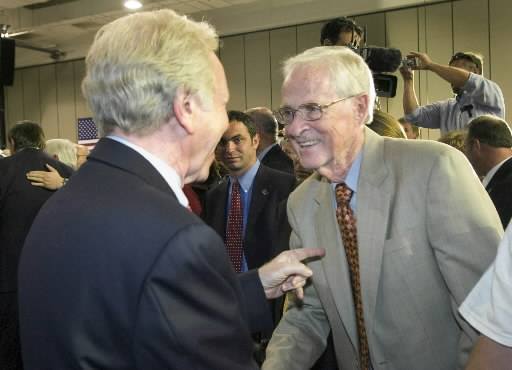 History Mystery, Pennsylvania Primary Election Day style: This York countian, right, has been a leader in his home county and a friend of U.S. presidents for decades. At the same time, this former educator has a common touch. Here, he meets Sen. Joe Lieberman. Can you ID this achiever? Have you ever met him? Answer: http://goo.gl/amnJID or see photo of this elected official early in his career at bottom. Also of interest: Check out these additional quizzes and fun tests.

Test your York Smarts with 5 more quizzes below. Click on the date if the photo does not appear on your mobile device.

History Mystery: The current owners of this #YorkPa business, which goes back to 1928, say: ‘They keep trying to…

Posted by York Daily Record/Sunday News on Tuesday, May 19, 2015

History Mystery: We’re told people need a firm foundation to stand upon, include this nearly 7-foot bronze statue in…

The year was 1887. And this celebration’s banners are tethered to the flag pole, at right. (Someone had to climb that…

History Mystery: This pioneer and Amos Palmer were York’s first black police officers to ride in squad cars. He went on…

Posted by York Daily Record/Sunday News on Thursday, May 14, 2015

History Mystery: This performer with #YorkCountyPa ties has played on the national stage for decades and was inducted…

Posted by York Daily Record/Sunday News on Saturday, May 16, 2015

PHOTOS: A new dig began today in the search for a Revolutionary War prison camp in #yorkpa http://t.co/9hJmuj3JOy pic.twitter.com/1pCtA0sakB

Another view: The elected official at top: Bill Goodling at the beginning of his career