So you want to become a journalist or a historian, Part II. Are you a reader? 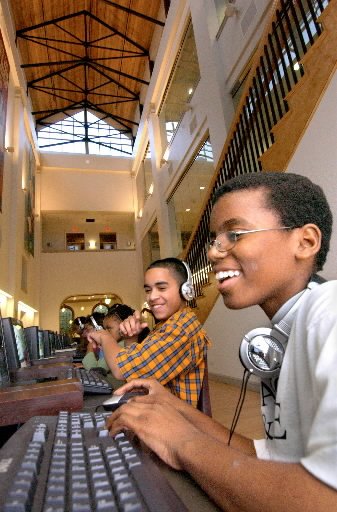 At one time, books were the main fare offered in libraries. Now, Martin Library  in York, Pa., offers a host of services. Here in this 2005 photo, a couple of young York countians use computers, then positioned in the library’s new atrium. Oh yes, people, many people, still check out books at Martin. Also of interest: Recent books demonstrate York County has much history to explore, and researchers are digging into it.

I am working with a young man who is trying to decide his career path.

Writing represented one path he wanted to try. Another was an area of special interest to him.

Why not test both paths? I asked him. Work on a blog exploring that special interest. That would test your call as a writer.

You might think that libraries are supposed to be quiet. They usually are, in a productive, common-sense way. But the volume was high by design when the Youth Empowerment Summit took over at Martin. On that day, kids had the fun they always have at a library. It was just a little louder. Also of interest: Light pierces a dark and stormy night in Glen Rock.

If you can blog consistently on an area of intense interest, that will tell you something. If you can’t, well, maybe a different field is out there for you to explore.

By the way, are you a reader? I asked.

He said he was.

His start in blogging was promising, though he has been detoured for several weeks for reasons beyond his control.

I’m hoping he’ll get back to it. He has a nice, easy style, suggesting he, indeed, is a reader.

When I talk to groups of aspiring journalists, I wrote in “So you want to become a journalist or a historian. Are you a reader?”,  I tell them there’s a way to test their call for our profession.

Two years later, I believe those words still to be true – maybe even more to the point.

The relationship of reading and writing is symbiotic.

I personally find writing is coming a bit easier, though still the hardest of work. Maybe that comes from writing more than ever, even with a busier-than-ever schedule. Or maybe it stems from my reading (the traditional way and via audiobooks) 70 books on the Modern Library’s Top 100 list.

Self-imposed streak reading programs, like this ML Top 100 journey, have always been a motivator for me. So I’ve read right through most of the novels of Sinclair Lewis or John P. Marquand or the nonfiction of Francis Schaeffer in past binges.

I’ve now caught the bug for Southern writer Pat Conroy, plowing through audiobooks of his “South of Broad” and “My Reading Life.” (Conroy says in a “My Reading Life” interview that audiobooks have brought back the oral tradition, and the storytellers reading these books on tape are practicing an art form.)

And here’s another streak: I just finished “One Book – One Community’s” 2014 pick, “The Worst Hard Time.”

Back to the challenge of  reading through the Modern Library’s Top 100 list.

Now that I’m 70 percent through, here are some snapshots of the experience:

– Favorite book so far: William Kennedy’s “Ironweed.” (92 on the list). This could change as the favorite, but Kennedy’s work effectively points to how mental illness can ravage a person as profoundly as physical illness. One feels like screaming: “Don’t do that. Here’s the way out.” But it’s always easier to tell that to someone else.

– Least favorite: It’d have to be Philip Roth’s “Portnoy’s Complaint.” (52) It seems many of the books made the list because they pushed the limits of decency, and Roth clearly did that.

It seems that some writers are more intent on pushing their political or social agenda than simply telling a good story with meaning. Pat Conroy says the four most beautiful words are “Tell me a story.” Some of these ML100’s writers – Roth in this case – missed the idea of story.

The most redeeming point about ‘PC’ was that it bore a fleeting reference to York. The main character used a York Barbell.

– One lesson learned: These books sometimes start off slow. If you’re patient, you’ll grow used to the author’s pace and points. When you listen via audiobook, you also must get used to the actor’s accent and voice.

– Audiobooks count: They had better! My day job coordinating about two dozen newsrooms in the East often has me on the road, and nothing makes a five-hour trip move faster than a classic on an audiobook.

– Working through these thick classics: When you’re on a long reading project like this, you need to be urged on. A key encourager is Martin Library’s Bob Rambo, who coordinates the interlibrary loan department there. He searches all over for the next candidate on ML’s list for me to tackle. (People should be aware of this wonderful service offered by Bob and Martin Library.)

– Book atop my reading stack: Audiobook – Virginia Woolf’s “To the Lighthouse.” (15) Reading – Willa Cather’s “Death Comes for the Archbishop.” (61)

– Last of the 100 to be read? No doubt it will be Henry James “The Golden Bowl.”  (32) No audiobook is available for that, and Henry James had a talent for turning every 15-word sentence into 45 words. I’m in no hurry to get to that. 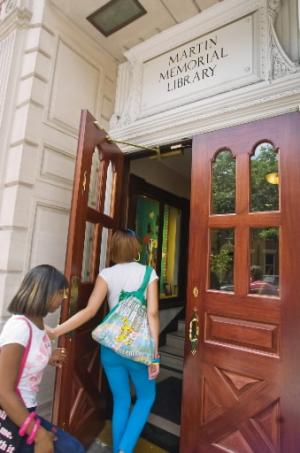 Hundreds of people walk through these doors at Martin Library each day. (I’m there at least once a week myself, mainly checking out the new audiobook offerings.) What you can’t immediately find behind those doors can often be located via interlibrary loan.

Also of interest:
York County late in getting college, library

Check out this blog’s Books and Reading category