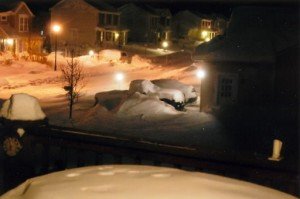 Joe Palmieri of Conewago Township submitted this photos taken after the ‘ Blizzard of 2010.’ About the picture above, he writes, “Shot approximately 2 a.m. after snow downfall, 2/6/ 2010.’ (See how the York, Pa, Daily Record/Sunday News staff covered the storm below. Other noteworthy meteorological events from York County’s past: York County residents passed through fire and water, or water and fire, in 1822 and For years, York countians have eyed amazing, destructive Susquehanna River ice jams and York County’s ‘uncommon,’ deadly snowfall of 1772: ‘The poor animals struck through’.

The Blizzard of 1996 spawned the introduction of ydr.com, the York Daily Record/Sunday News Web site.
And this week’s “Snowmageddon” caused the news organization to innovate even more.
Such was the topic of my upcoming York Sunday News column.
After all this coverage, the feeling of many in the newsroom reflected the next morning’s headline: “Enough Already”:
The column follows:

The York Daily Record newsroom worked through what some believed to be the blizzard of the century in 1993.
Twenty inches of snow paralyzed the area that Sunday in March, as many folks, already at home, stayed there watching events on television.
The Daily Record staff watched television, too, but they were laboring on the next day’s newspaper in their Springettsbury Township newsroom. They mined the TV news for leads – to make sure nothing was missed.
Another snowstorm of the century hit three years later, the Blizzard of 1996. Some businesses closed for a week, and the Susquehanna River’s muddy waters and ice chunks as big as houses moved ashore.
Getting the Daily Record delivered the next day was next to impossible with a gubernatorial decree shutting down the state.
But the Daily Record had been developing a yet untested alternative news delivery system – a Web site. Instead of delivering the newspaper that day, we launched ydr.com on the Internet.
The news site joined a handful of pioneering York County Web sites and has become the dominant, most-viewed Internet address for county happenings today.
Challenging newsgathering conditions in 1996 thus sparked the use of new technology that has since become a staple Web site in the York County community.
+++
Last week’s inclement weather again provided an opportunity for change.
The York Daily Record/Sunday News and the York Newspaper Co. had enough staff to meet the challenge from Mother Nature — rooms at West Manchester’s Holiday Inn guaranteed that.
To cover a storm of that size is challenging, even when everything goes well.
Snow slows the ability of photographers and reporters to get around. We face the crunch of more work in tighter timeframes to meet early deadlines to allow more time for the newspaper to be delivered.
And even small things like finding food for 50 or more journalists become challenges. I mean, eating cold pizza gets old after, oh, about one bite.
The Web site, ydr.com, has evolved so that we no longer rely on TV as in 1993. We now post stories, photos and videos on ydr.com as soon as we get them so that we are more immediate, as we say it, with news about York County than TV or any other media.
We now do this pretty much 24-7, plus produce a seven-day newspaper.
The challenge of immediate news updates considering the complexities presented by last week’s storm was daunting.
But then something happened that made a massive news coverage challenge an almost perfect storm.
The power at our West Manchester Township newsroom and press facility went out at about 10:30 a.m.
That meant all our computers used to produce the newspaper, and our printing press, were inoperable. So was the heating system in the then-dark building.
+++
I wandered through the snow to join a cluster of electricians at a shed, the suspected site of the power problem. It looked to me that a major challenge loomed, considering the melted appearance of three insulators covering huge fuses in that big metal box.
But news immediacy remained the goal.
Under Managing Editor Randy Parker’s leadership, a banquet room at the nearby Holiday Inn became our newsroom. We cobbled together a network of laptops and smart phones to provide a system to write and edit stories and photos. At one time, we had as many as 17 laptops on this makeshift wireless network.
This operation allowed us to update ydr.com with news stories, photos and videos. In this way, the hard work of our news gatherers was immediately available for tens of thousands of eyeballs. Actually, Web technology enables us to count those eyeballs, and we scored one of our most-viewed days since such record-keeping started in the Blizzard of 1996.
We also sketched a plan to produce the newspaper on computerized pages and then port those pages to print when power for the press was restored.
+++
About 5:30 p.m., the lights came back on. A team of experts from York Newspaper Co., Met-Ed and Gettle Incorporated defrosted the power meltdown.
Our journalists slipped and slided eastward on snow-covered Loucks Road back to our newsroom, and we put out the newspaper.
And kept updating the Web.
We had demonstrated that we can publish from a remote banquet room just off a motel’s restaurant.
That storm of 2010, covered by our staff with coolness and professionalism, had generated innovation.
And then I received an e-mail the next morning from Matt Anderson, our front-page editor that night: “eight (minutes) early for an hour early deadline.”
We had done all this on time.