Golden Venture detainees in York County Prison: ‘Illegal immigrants or refugees – or something in between’ 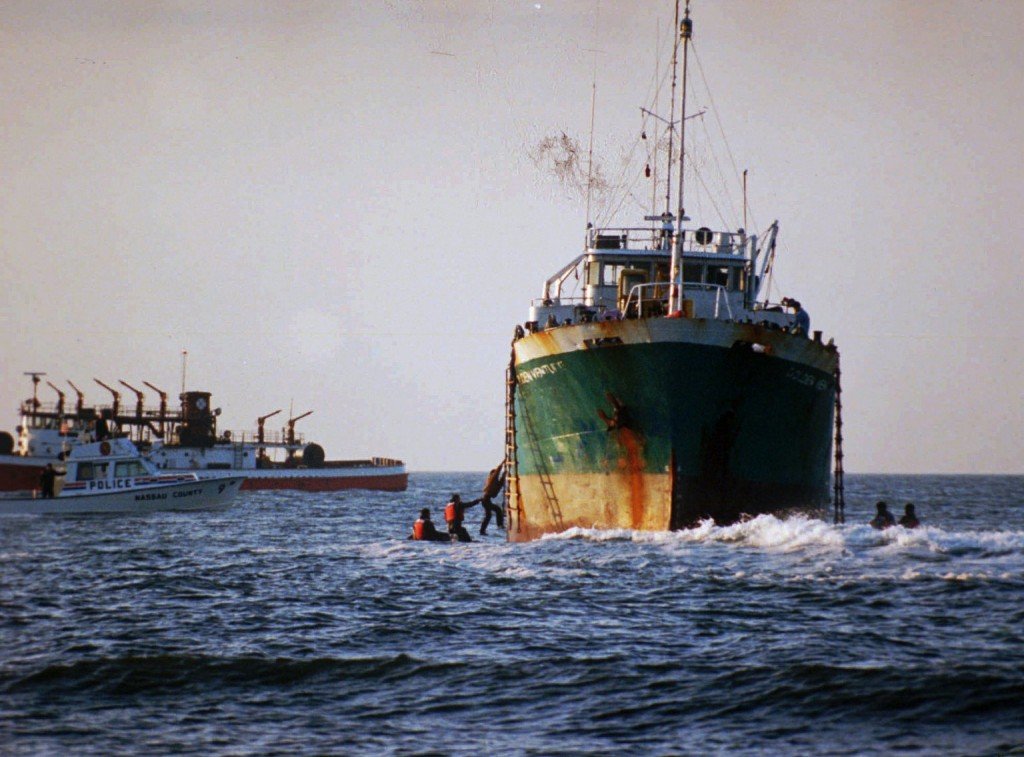 A rescuer holds a Chinese passenger by his pants as he tries to transfer to a small boat from the grounded freighter Golden Venture June 6, 1993, off New York City. About 40 passengers were detained in York County Prison for more than three years awaiting disposition of their cases (Associated Press photo). A dozen years after their release, a book discusses their plight. Background posts: ‘York: A Key City in the Keystone State’ and York’s Chestnut Street fortress bad symbol of York’s past and All famous York visitor posts from the start

Reviewer Alex Kotlowitz got it right in assessing Patrick Radden Keefe’s “The Snakehead, An Epic Tale of the Chinatown Underworld and the American Dream:”
He notes that Keefe writes that America has suffered a kind of bipolarity when it comes to immigration throughout history… .

The Golden Venture detainees left behind artwork made of everyday items during their months of incarceration. Here, two exhibit-goers examine folded-paper artwork at the Strand-Capitol Performing Arts Center in 2006.
Then the reviewer wrote:

“And so it was that the men and women on the Golden Venture were not embraced but instead imprisoned, most of them in a jail in York, Pa., where they remained for three years while the government tried to figure out how it viewed them: as illegal immigrants or refugees — or something in between. Indeed, the Golden Venture, which Keefe points out brought ‘the single largest arrival of illegal aliens in modern American history,’ came to symbolize the tightly wound tension that has long characterized this nation’s stance on immigration: the instinct to take in the tired and the poor versus the oft-expressed inclination to return new arrivals to their home countries. ‘The Snakehead’ evocatively captures our yin and yang over immigration policy.”

As this national battle was being played out in York in the 1990s, about 40 detainees from the Golden Venture sat in York County Prison for months – years – even though they were never charged with a crime.
Could that happen in America?
On balance, York County was on the right side of this immigration issue.
The interdenominational People of the Golden Vision were the focal point of community support for the plight of these passengers. As one would suspect, some in the community were opposed and others were indifferent.
But the overall tenor was one of support.
Some of the indifference came because of the onset of public weariness about the story as the detention persisted for more than three years.
In news columns, the York Daily Record/Sunday News covered the detainees in detail. In opinion pieces, the newspaper was supportive.
But editors had lots of discussions about the level of sustained community interest in the story. How many resources should we pour into coverage of 40 people sitting in jail for months and months? How did this story affect the lives of our readers? Wasn’t this a high-level immigration issue that failed to hit the average York countian where they lived?
Still, editors considered this one of those stories that we should cover aggressively because it was important, even though perhaps not of apparent everyday interest.
This we did. It was the right decision.
To read Kotlowitz’s Washington Post review, click here.
Keefe’s work is gaining reviews from other biggies as well.
To read a review in the New York Times, click here.
To read a review in the Times Book Review section, click here.
Updating:
The York Daily Record published a 20-year retrospective of the Golden Venture’s grounding in 2013.