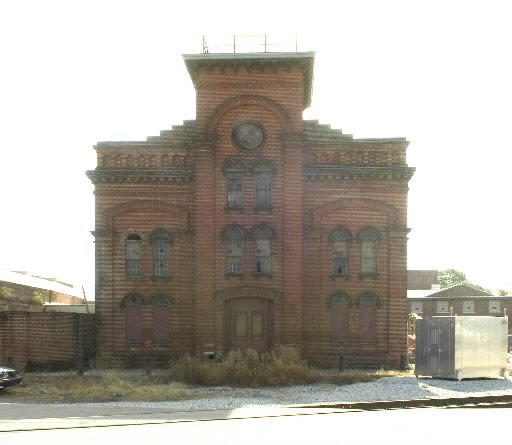 The Smyser-Royer building on York’s North Street will be restored under the Northwest Triangle plan. Other historic buildings slated for restoration include: the old post office building on Philadelphia and North Beaver streets and the Keystone Color Works building, Gas Avenue. Background post: York County’s Connection to the French Quarter and York’s mayor about Northwest Triangle: ‘We’re going to clean up this site … ‘ and A historic York walking tour of the Sovereign Bank stadium area and York, Pa.’s, old Smyser-Royer factory to house new York Academy charter school.
York’s new baseball stadium acts as a kind of hinge between two budding Codorus Creek-front projects.
To the east, the site of the former Graybill building and nearby former York County prison are being eyed for redevelopment.
To the west, the $50 million Northwest Triangle project offers a range of possibilities: restored historic properties, townhomes, offices and retail space.
Interesting, part of the development site was explored as a location for the stadium.
A neat map explains the project area, and yorktownsquare.com posts exploring several of its noteworthy or historic features follow: