Alert York, Pa., Daily Record/Sunday News journalists, equipped with smart phones, help cover the York County history front on their daily travels. The scenes above and below capture two moments from the scene of the events. The marker above describes the short-lived York Furnace Bridge that crossed the Susquehanna River in the 1850s. More at: Nature had its way with York Furnace Bridge.

This marker tells about publication of the Pennsylvania Gazette in York in 1777-78. Ben Franklin’s former printing press was transported here when Continental Congress stayed here that winter after the British ousted them from the comforts of Philadelphia. It printed the Pennsylvania Gazette, among other things, for about six months. More at: Events in 1777 helped tip Revolution toward the Patriots.

“The former students of the four-room Spry School in Spry held their 10th Reunion since holding their first reunion in 2000. Of the 93 people attending the reunion at the North Hopewell-Winterstown Volunteer Fire Company in Felton, 64 were Spry School students.”

For details about future reunion of the York Township school, contact Mike. 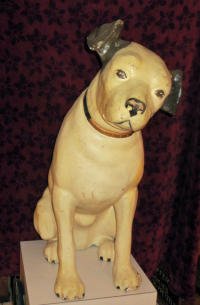 This longtime RCA mascot stands today with his ear cocked in familiar fashion in the basement of a York County collector. This particular figure sat near the entrance of Everhart Bros. Organ and Piano on York’s South George Street, as Gordon Freireich explains in this York Sunday News column.