Skinny dipping in the Codorus? 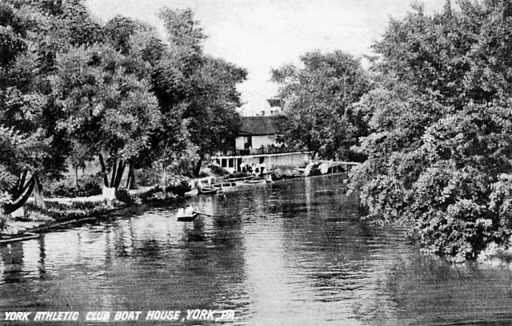 This photograph shows the Codorus Creek near Richland Avenue before flood-control efforts changed its look. A favorite swimming hole located downstream offered birthday-suit-clad bathers – and passengers on passing trains – a summertime thrill. Background post: What is the probability of another flood in York?

Raymond Sechrist recalled in the 1991 book “Skinny Dipping in the Codorus” that the popular hole was centered in the creek between the Pennsylvania Railroad and West Maryland Railroad bridges. (The swimming stop was located between 11 and 12 o’clock on this Northwest Triangle map.)

The boys in the buff swimming there would give train passengers a jolt – but that’s getting ahead of the story… .

With fields between the creek and city and weeping willow trees hanging over the water’s edge, the swimming hole had some privacy in certain directions. These were before Depression-era flood control improvements changed the look of the creek and its banks.
“You would think you were miles and miles from the city here,” he wrote.
We’ll let Sechrist tell about how the boys had fun:

“We’d hear the whistle blow down at the station, and somebody would holler, “All out,” and the boys would get out and shake. Then, when the train would cross the bridge with these passengers, we’d be out shaking ourselves without a stitch of clothing on… . I can see those conductors on the edge of the platform that led into those passenger cars. Some of the women put their hands up to their faces and just screamed and hollered and laughed out the window. You see, it was summertime and they’d have the windows up and they’d sit there and just scream and holler and laugh. In fact, they’d look for the boys to be on the bank down there shaking themselves as they went past.”

– See this aerial view of the hole where the skinny dippers dipped.

– Old York Flour Mill grinds away: ‘In the end, we’re all just millers’.

– This clergyman landed in the Codorus after Patriots pitched him in.