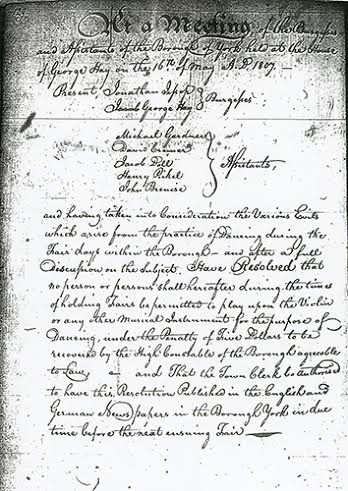 The Rev. Jim Driskell of First St. John’s Lutheran Church in York provided this action by York Borough relating to the York Fair in 1807. Long and short, it call for a ban on dancing at the York Fair, then situated with borough limits. Violators would pay $5, a tidy sum in those days ‘A member of our congregation felt that you might get a kick out of a document … ,’ Jim wrote. Yes, indeed. As it turns out, the York Fair faced more challenges than this. It was canceled about 10 years later after a death at the annual event. The fair did not resume until the 1850s. See more below. Also of interest: 250th anniversary of the York Fair comes in 2015. 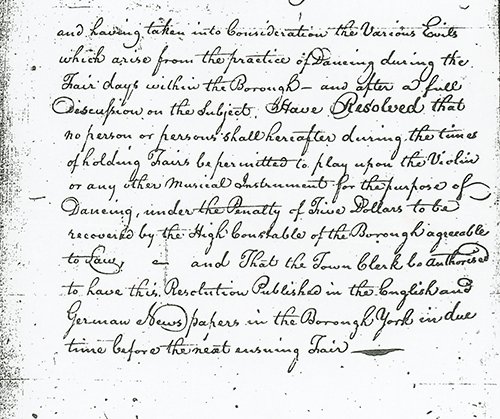 Interesting, too, are other quaint York City rules that persisted into the 1920s and beyond. York’s Mayor E.S. Hugentugler combatted a petting problem on park benches by posting a regulation that such lovers ‘will be required to sit at least one foot apart on moonlight nights and not less than two feet apart on dark nights,’ according to the book ‘Never to be Forgotten.’

+++
Jim Fahringer often gives interesting insight on social media about equally interesting events from around York County. His commented about his days of walking around this fountain: ‘The water lillies were neat. There was at least one other pool in the park but in my day that pool did not have a fountain like this but it did have goldfish also and water lillies. One of these fountain/pools were surrounded by a very high hedge that completely hid the pool and the circular walk around it. We used to like to go in there and hide.’

Riders on the Colebrookdale Railroad this weekend, you may have been witness to a rare treat. http://t.co/jnFAmI8BIa pic.twitter.com/zm4uv7NEea