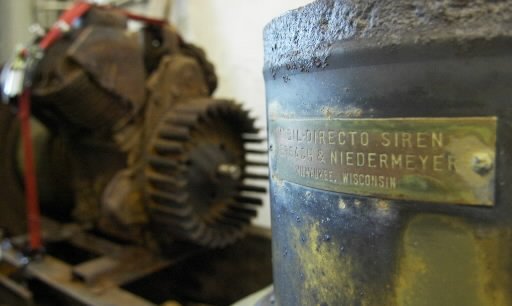 The Yorktowne Hotel recently donated a circa 1942 air raid siren to the York County Heritage Trust. The trust plans to restore it and place it on exhibit. Background posts: Unusual valve gave steam whistle prominence in World War II and The bomb: ‘And yet it stopped the war’.

Early in World War II, York-area Civilian Defense officials faced the problem of how to alert an entire community about an enemy air raid.
The numerous factory whistles in place were not designed to reach the entire community. The New York Wire Cloth whistle, with its adjustable valve that allowed it sound varying messages, provided one resource.
Sometime in or after 1942, Civilian Defense officials must have installed a air raid siren on the roof of the Yorktowne Hotel designed specifically to alert a broader area… .

That siren sat atop the hotel until recently when Yorktowne officials notified the York County Heritage Trust about its availability, and trust workers took it off the roof for refurbishing.
According to “Trust Talk,” a York County Heritage Trust publication, it’s a Mobil Directo Siren manufactured by Biersach and Niedermeyer Company under a Department of the Army contract in 1942.
The company made more thn 2,000 such sirens for use in the Pacific Theater.
Pete Adonis, who has restored many items for exhibition, will rehab the siren. When it is exhibited, the Trust would include oral histories from York County esident who heard the siren’s sound during the war. Trust officials are looking for those who would like to tell about this experience.
“Trust Talk” did not speak about whether the siren rehab work would include restoring its ear-splitting sound.
If so, there will be no mistaking whether the restoration project was effective.
(Photo courtesy of York County Heritage Trust.)