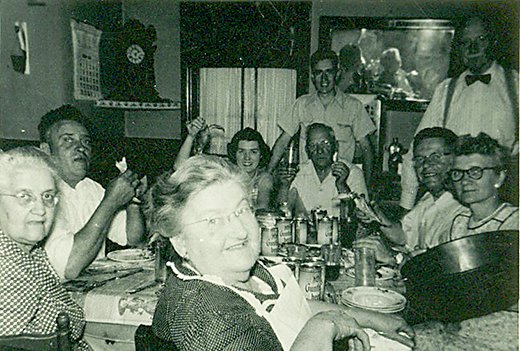 Now this is a York County scene. Fellowship around the table. In this case, it’s an Anstine family gathering. ‘Late 1940’s when my family brought steamed Maryland hard crabs to Aunt Lilly’s for a crab feast,’ Anne B. Tempera, an Anstine from Baltimore, wrote. She wrote inquiring about how to get a copy of  the book ‘Glen Rock: An Historical Review.’ I put her in contact with John ‘Otts’ Hufnagel. As for the Anstines, she is working on a family slideshow to put on the Anstine Family History Society website. The Anstines, of course, are one of York County’s early names, joining the Glattfelters, Loucks, Spanglers and other longtime families.   ‘My maternal grandfather’s family came from Germany (not much news there) in the 1700’s,’ she wrote. Prominent Attorney Dale Anstine is one of Anne’s cousins. (Read more about Anne and the Anstines below.) Another prominent York County family of interest: York County’s widespread Ehrhart clan: ‘By now probably 1/2 of York Co. has Ehrhart blood’.

The York Daily Record/Sunday News’ Exit Interviews series continues with a look at a York countians in the racing pigeon business, long popular in York County: Off Exit 35, pigeons race back home.

“(Arvel) Freydenfelt’s hardiest racer has 13 races of at least 500 miles under his belt,” YDR’s John Hilton wrote. “The innate ability to repeatedly fly their way home from faraway places is what keeps pigeon race owners in the game.

“It’s amazing the amount of area they can cover when you think about all the different possible things that can happen to them over that distance,” Freydenfelt said. “It’s one of those mysterious things.”

More on that Gettysburg 150th: The Library of Congress is displaying the Gettyburg Address and The Gettysburg Battlefield is drawing visitors from near and far.

Famous ficus: Yes, it’s a storied tree, taller than a man and weighing 300 pounds with pot, left behind by a family leaving York. And it’s awaiting a new owner. It’s just an interesting story – a love story – offered by Re-Source York.

And now … more about the Anstines … 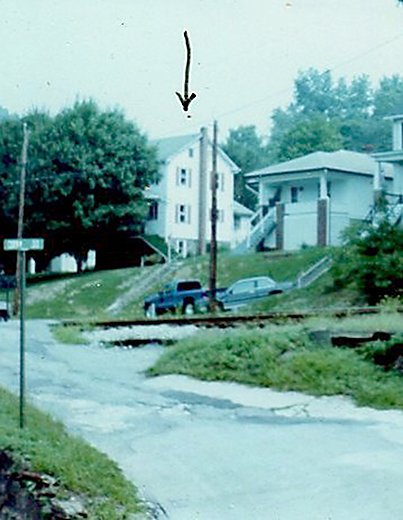 ‘As my family has done many times over the years, we went on a road trip last summer to the house where our Aunt Lilly & Uncle Clint Anstine lived on Rail View Court.  The young couple who presently own the house were kind enough to let us in and explore what we had not seen since the mid 1950’s when our Aunt Lilly died,’ Anne B. Tempera, Baltimore, wrote about her Glen Rock/Seitzland family. That’s her arrow on the photograph. She signed off on her email: ‘Anne B. Tempera  (but an Anstine at heart and DNA)’.