Should York’s Bradford pear trees get the ax? Linked in with neat York County history stuff, May 17, 2012 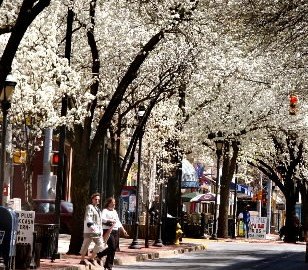 Those Bradford pear trees that flower so beautifully? They might be a victim of attempts to refresh the largely vacant section of West Market Street leading away from the square. A consultant has suggested as much. Trees, whether planned or unplanned, have been with York’s downtown since its founding in 1741. And to be complete, trees of a different sort – with a thinner canopy – will be planted and additional diagonal parking spaces will be added. So all this leads to the question:  Do you want the flowering pear trees removed along West Market Street because they obscure building architecture. Also of interest: and York’s Bradford pear trees: ‘Beautiful arch of blooms … followed by the snowstorm of petals’

A proposal to building a new fire station on land in Springettsbury Township has cast a spotlight on former residents of that property: The Stony Brook Drive-In and the AMC 4 Theatre.

“I remember the Stony Brook Drive-in as one of my earliest memories. The Disneyland black & white TV show in the mid-50s ran a miniseries based on Davy Crockett. The episodes were later edited together and released theatrically in 1956. This release was the first movie I ever remember seeing on the big screen. I saw it at the Stony Brook Drive-in. Even though I had seen the miniseries on the small black & white TV at home, the excitement of seeing the same thing in color on a big screen was something for a six-year old. By 1972 I had just graduated from college; the Stony Brook Drive-in was still in occasional use. I wonder when the last movie was shown on the Drive-in screen? By 1972 the York Cinema Theatre was showing indoor movies in a building built in the entrance court to the Drive-in. This later became an AMC 4 Theatre. Also by 1972 at the rear of the York Mall there was a movie theater next to Montgomery Ward; it was called Trans-Lux. The Trans-Lux movie theater had huge screens when it opened; although eventually they were partitioned into additional smaller screens. Currently there are no movie theaters in the same general area.”

We’ll ask again: Any memories of the days when you went to the movies or just to hang out there? Please comment below.

Mystery solved: Gretchen Smith submitted a photograph of a downtown York scene asking for the photo to be dated. The Preserving York Facebook group placed it in York and named the street. Check out how the Preserving Yorkers set to work.

Another mystery: And a commenter on the original post on yorktownsquare.com conjectured that the odd-shaped wagon might have been in place to carry the columns from the original Market Street courthouse to or from storage. Its replacement – the now standing administrative center – was being built on its former footprint at the turn of the 20th century. The columns were incorporated into the new courthouse and are the main feature of the administrative center’s East Market Street facade today. Interesting theory. Comments? Let us know below. 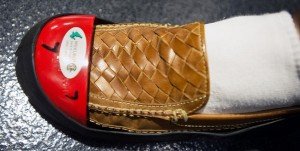 These are the steel tip loafers available for the Steel Toe Tour, a new $35 insider look at Harley-Davidson’s Springettsbury Township plant.

On the record about York’s streetscape with consultant Frank Dittenhafer