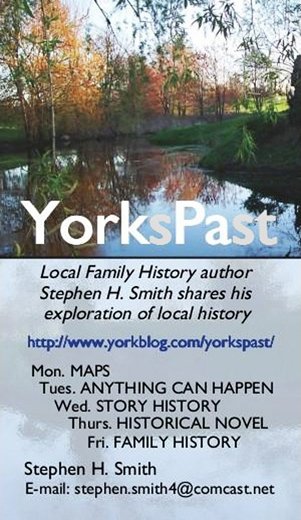 Newly minted Yorkblogger Stephen H. Smith is offering to share his considerable knowledge of York County history via YorksPast. This card shows the lineup of topics he is offering. He is one of several history bloggers on Yorkblog.com, including June Lloyd’s Universal York, Scott Mingus’ Cannonball and Joan Concilio’s Only in York County. Not surprisingly, the history writers are among Yorkblog’s longest running blogs. York Town Square, of course, is in that category, too. Also of interest: Yorktownsquare.com post No. 2,500: Keeping the memory of Navy SEAL Neil C. Roberts in public view.

Stephen H. Smith is known in the York-area historical community as a precise researcher with an interest in detail.

I’ve often used his research on this blog (John F. Kennedy lunched on Lincoln Woods Inn’s expensive fare in 1960), and he often comments on blog posts (see his comment at bottom of this post (Hidden Loucks School reflects past way of York County life).

Now he has his own blog: YorksPast.

One helpful area of specialization is the listing and location of York County’s 300 or so one-room schools.

Several months ago, I asked him what fueled his interest in history.

“I know the exact event that caused me to catch the history bug; it goes back to a U.S. History Class in high school and an assignment to write a report on an influential person from the local area. I started work on the assignment at the Martin Memorial Library by asking the reference librarian to name some local influential people. She started to name local politicians, but then mentioned Mahlon Haines. I remembered seeing him during Cub Scout outings at his Wizard Ranch near Accomac, but primarily remembered him as the jovial guy whom my Dad bought our flock of 11 sheep to keep the grass down in the pasture at our farm.

“I asked the librarian, does the library have any articles on Mahlon; she returned with about a half-dozen large scrapbooks. These were scrapbooks put together by Mahlon Haines that covered his life and were donated to Martin Memorial Library before he died; they are now in the YCHT. After writing that report in high school, my interest in history hit a higher level. At that time I also started to keep a notebook of things I did and observed; kind of like Mahlon . . . eventually that ever-expanding work will be my autobiography.

“I was a design engineer with York  International Corp. for 33 years before retiring several years ago to research and write books full time; my second career. The initial emphasis was on family history where I won a national award during 2002 for my first book “Barshingers in America;” while still working for York International. Positive feedback and that award were influential in my decision to retire early from engineering and start a retirement career. I research to gather information for other family histories and to gather background for the first of several planned historical novels, which have been in the works for many years. The direction of the initial novel has changed more times than I want to admit; however right now it is as if I can see the whole novel crystal clear in my mind. I’m currently very busy researching to tie up loose ends; so  that the novel is historically accurate.”

I hope you check out Stephen’s blog. In fact, from a look at the number of YorksPast’s visitors, a lot of you have already done so.