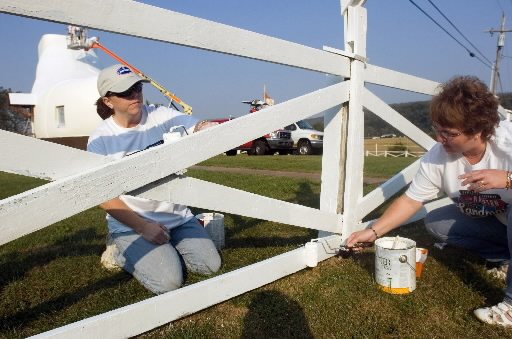 Denise Cummins, left, of Shrewsbury and Kris Becker of Lancaster work near the Haines Shoe House on Wednesday. The work was part of the Hampton Hotels’ ‘Save-A-Landmark’ program, a well-conceived program to preserve unusual American architecture. Also of interest: York countians are discovering Brigadoon-like Bedford, Pa.

York’s famous Shoe House is getting a shine.
Some facts before the story on this familiar roadside attraction along the Lincoln Highway (although it’s odd in that it’s not immediately beside the road):

Built by: Master promoter Mahlon “The Shoe Wizard” Haines.
Year built: 1948.
Built for? To promote Haines’ chain of shoe stores. “He began on a shoe string,” the Saturday Evening Post said, “which he tied into a long string of shoe stores.”
Haines’ challenge: York countians liked to go barefoot in the summer. By Easter, shoes came off until the fall rolled around, one resident wrote about small-town life in the 1920s and 1930s. “Almost everyone went barefoot in the summertime unless we did something or went somewhere that absolutely required shoes.”
Height: 25 feet.
Length: 48 feet.
Width: 17 feet.
Rooms: 7
Uses: It has served as a roadside attraction, ice cream parlor and honeymoon suite.
And now, the story on buffing the shoehouse:

Fells and her daughter, Sharon Fells, who lives in Memphis, got a chance to visit Wednesday during a rare restoration project.
Sharon Fells, 40, works for Memphis-based Hampton Hotels. She was excited to be chosen among about 30 co-workers to visit Hellam Township to help refurbish the historic Haines Shoe House.
The effort was in conjunction with Hampton Hotels’ “Save-A-Landmark” campaign, which refurbishes landmarks across the country.
Prior projects include the “World’s Largest Teapot” in Chester, W.Va., and the “World’s Largest Buffalo” in Jamestown, N.D.
Ernestine Fells decided to help while she was spending time with her daughter. As Sharon Fells worked on the shoe house, her mother was nearby sorting normal-sized shoes for Soles4Souls, a nonprofit organization that collects and distributes shoes for people affected by natural disasters.
“I was so happy when she said they would let her come,” Ernestine Fells said of her daughter’s visit. She said took her daughter and seven other children to visit the shoe house when they were young.
“I felt like I was in a life-size dollhouse,” Sharon Fells said.
Judy Christa, vice-president of marketing for Memphis-based Hampton Global, said volunteers from her area and other cities including York, Lancaster, Gettysburg, Harrisburg, and Annapolis, Md., worked with contractors who specialize in refurbishing historic buildings to polish the gigantic old shoe.
Hampton Hotels donated $20,000 in supplies for the project. The company’s volunteers for the last seven years have preserved more than 30 landmarks. Christa said the Shoe House marks the 33rd project in the country.
“Our goal is to do one in every state,” she said. Ideas for the landmarks usually come from online nominations. The shoe house was chosen by company officials after a random online search for unusual landmarks, she said.
Carleen Farabaugh and her husband, Ronald, have owned the house since 2003. They sometimes stay at the house, which is a fully functional home but not their primary residence. The couple also gives tours of the building and sell ice cream there.
Carleen Farabaugh said she was skeptical when she got a call from a Hampton representative offering to help refurbish the shoe house.
“I thought it was a crank call. I was very hesitant,” she said.
But after researching the hotel chain’s other projects across the country, she realized the offer was legitimate.
She was grateful on Wednesday as she watched strangers help work on the shoe.
“It’s still in need of restoration, but they took a tremendous load off of us,” she said. “It’s fabulous. It’s back to its original luster that it was 59 years ago.”
Farabaugh said the restoration will benefit many people.
“We get visitors from all over the world,” she said.
Denella Richard, Hampton’s Save-A-Landmark manager, said Farabaugh’s initial reaction to the restoration offer was typical.
“Whenever we call landmark owners they think it’s a prank in most cases,” she said. But the projects are fun and employees look forward to them, she said.
travel to be in Roland, Manitoba, Canada, to help restore the “World’s Largest Pumpkin.”
ONLINE
To learn more about the restoration projects Hampton has completed through the “Save-A-Landmark” program, visit hamptonlandmarks.com.