Sharpshooters Monument vandalized in Gettysburg. Why do people do such things? Linked in with neat York County history stuff, March 12, 2012 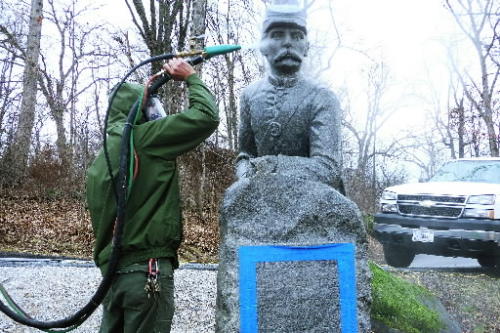 A National Park Service worker removes spray paint from the 2nd Andrews Sharpshooters monument at the Gettysburg National Military Park recently. It was the most recent monument in Gettysburg to be vandalized. A Hanover Evening Sun story does a nice job summing up the damaged monuments in past 5 years. Too many vandalized. Why do people do such things? (See related photograph below, that of the 11th Massachusetts Infantry monument before vandals hit.) Also of interest: Gettysburg statue again stands tall, with new noggin.

Eugene Geesey, egeesey@suddenlink.net is a member of Dallastown’s Class of 1949.

And Eugene, known as Johnny, has wonderful memories of Pinchgut, aka Adamsville, that tiny hamlet near Red Lion.

A man named Myers, he wrote, operated certified horseshoe pitching pits in his back yard. It was lighted for nighttime pitching.

“My dad would take me along to watch on occasion,” he wrote. “The pits were official clay and many tournaments were played there.”

It was originally a dairy, Eugene wrote, with the motto: “You can’t beat our milk but you can whip our cream.”

“It was delivered in bottles with real cream on top,” he wrote. “In the winter, it would freeze and the cardboard top would push off … .”

Johnny lives outside county borders but hopes to return some day.

He didn’t say whether the attractive village of Pinchgut would be his destination.

Squint a bit: Blake Stough over at Preserving York has a fascinating, photo-heavy post on signs fading into the sides of area buildings.

65 years ago: Jackie Robinson broke Major League Baseball’s color barrier on April 15, 1947. The York Daily Record/Sunday News is looking for memories about this pioneer or that day. If so, call 717-771-2007 and tell your story.

Blog post of the day: Sounds like a good outing to Antietam, the 1862 Civil War battle in Northern Maryland. Tour the field and meet Scott Mingus. 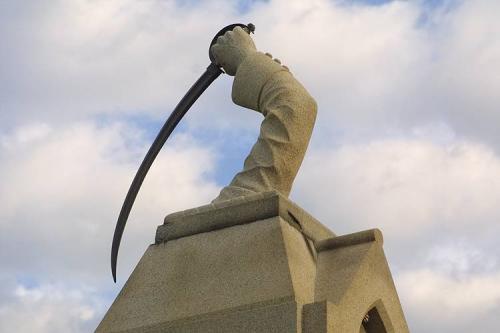 The Hanover Evening Sun does a good job keeping track of the bad stuff that happens to monuments in Gettysburg (the content and photos in this post came from the Evening Sun.) Here is a pice of its reporting on the the 11th Massachusetts Infantry: “It has taken six years but soon the wounds will be healed. The shattered granite arm will be replaced. The soldier’s hand will be repaired and the curved sword reattached. The 11th Massachusetts Infantry monument will be the last restored after a night of wreckage on the Gettysburg Battlefield, Feb. 16, 2006.”