Part of the grounds of Spring Garden Township’s Shady Dell was devoted to selling cars. George A. Brown sold REO and Cadillac cars about 1920 at the Dell. Here, deer hang outside Brown’s Violet Hill barn. A lot has gone on at the Dell in addition to its role as a southside teen hangout. (Click to enlarge; see additional Dell photo below of another activity at the Dell.) Also of interest: York’s old teen hangout is still the Shady Dell.

It seems that you can’t write enough – or read enough – about the Shady Dell, the recently remodeled Shady Dell.

It’s been a lot of things before it was that hangout, loved by teens, hated by parents.

“Even before the huge Victorian house went up and the barn was built and John and Helen Ettline threw a four-decade-long party for local teenagers, the area at the top of the hill was called Shady Dell.

You can read the rest of Mike’s piece here: Memories of growing up at the Shady Dell.

If you want even more of the Dell, buy it. The renovated Dell is for sale.

But really, this website, Shady Dell Music & Memories, has everything and anything about the old hangout. 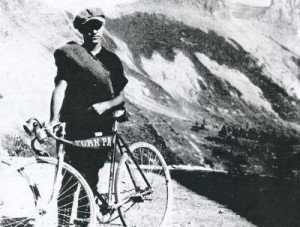 Arthur Miller of West York, seen here, and friend Earl Hagerman, biked across America in 1923. Miller kept a scrapbook of his adventure. Check out: Across the country on bicycle — in 1923.

Forum of the day:  A question linked to Finding their way out, the York Daily Record/Sunday News’ look at former students  years after the shooting of a junior high principal, is post on ydr.com. Fee free to weigh in: 9 years later, Red Lion heals.

George Brown, builder of the Shady Dell, raised hunting dogs, among other things. To find out what other things, check out Mike Argento’s: Memories of growing up at the Dell.