Several First Ladies have graced The Yorktowne Hotel. Which First Lady did not?

The Yorktowne Hotel, seeking to play on its rich history as part of its rebirth after financial problems, offers guests quizzes. Here is one of those fun tests. How would you answer this. (See correct answer below.) Also of interest: York without the Yorktowne Hotel? Unimaginable.

Yorktowne Hotel GM Rick Cunningham, sitting at a table in his coffee shop, took out a quiz about First Ladies who had visited York County’s premier hotel.

Actually, it was a quiz about which of five First Ladies had not visited the Yorktowne.

I obviously over thought the matter.

Richard Nixon, George H.W. Bush, Bill Clinton and George W. Bush had been to York. Franklin Roosevelt did not stop here – he just passed through.

So clearly the answer was Eleanor Roosevelt.
Jason Plotkin, sitting at the same table, put forth the name of Laura Bush.

The answer, as summed up by York Daily Record/Sunday News journalist Lauren Boyer: “The answer: Laura Bush. (Rick) Cunningham said the hotel reserved a suite for her when she spoke at the Strand. The Secret Service canceled her room at the last minute, as she opted to stay instead with family in Maryland.”

Jason was ecstatic, with tweets going out about his victory.

Eighteen people voted, and only one got it right. Eleven incorrectly backed Hillary Clinton.

So I was in good company.

Check out this list of presidential visits to York County. 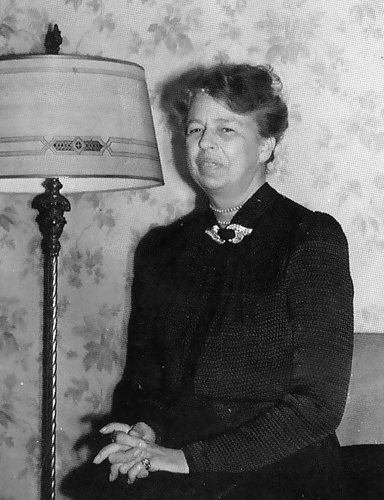 First Lady Eleanor Roosevelt visited York and The Yorktowne in 1942. She is shown here is a photograph from ‘Overnight Success The Yorktowne Hotel at 70.’