Seven Gates of Hell: A history mystery of mythical proportions 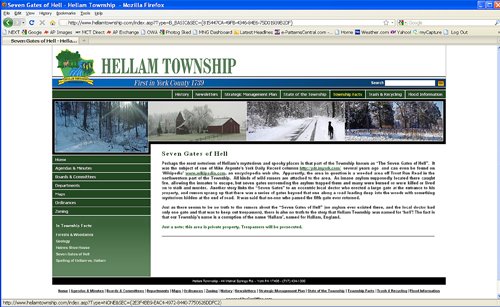 Hellam Township’s website tells the story of one of York County’s most persistent myths – the presence of the Seven Gates of Hell. Also of interest: What do you think about those ghost stories linked to historic sites in York and Adams counties?

A run through York County’s municipal websites shows an uneven treatment of their histories.

The site addresses many attractions throughout the eastern York County area. The Confederate soldiers grave near the river is one. Haines Shoe House, historic barns, the “Codorus” steamboat,  Codorus Furnace are on there. So is the the going confusion between Hallam (Borough)  and Hellam (Township.)

But the most interesting to many people is the locale known as the “Seven Gates of Hell.”

That place has been described in books, on the Web and in the newspaper.

“Perhaps the most notorious of Hellam’s mysterious and spooky places is that part of the Township known as “The Seven Gates of Hell”. Apparently, the area in question is a wooded area off Trout Run Road in the northwestern part of the Township. All kinds of wild rumors are attached to the area. An insane asylum supposedly located there caught fire, allowing the inmates to escape, but seven gates surrounding the asylum trapped them and many were burned or were killed or lived on to stalk and murder. Another story links the ‘Seven Gates’ to an eccentric local doctor who erected a large gate at the entrance to his property, and rumors sprang up that there was a series of gates beyond that one along a road leading deep into the woods with something mysterious hidden at the end of road. It was said that no-one who passed the fifth gate ever returned.

“Just as there seems to be no truth to the rumors about the ‘Seven Gates of Hell’ (no asylum ever existed there, and the local doctor had only one gate and that was to keep out trespassers), there is also no truth to the story that Hellam Township was named for ‘hell’! The fact is that our Township’s name is a corruption of the name ‘Hallam’, named for Hallam, England.”

Kudos to Hellam Township for dealing with the subject head on. Local historians agree,  dismissing the location with a Harumph!

And now,  another couple of words from the township:

“Just a note: this area is private property. Trespassers will be prosecuted.”

And here’s a query for our readers: Do you have any personal stories about that site? (See the post: Date nights in Rehmeyer’s Hollow and other stories about York County’s Hex Murder.) Have you ever gone out looking for the mythical Toad Road associated with the site?

– Wikipedia has an entry for the Seven Gates of Hell with some additional sourcing.

A bit of serendipity

I had run across the Hellam Township website (I had been there before) in looking around for information on a recent Brenneman’s one-room school post. That school, as it turns out, is in Lower Windsor Township. I love those moments when you run across fascinating material when you’re looking for something else.