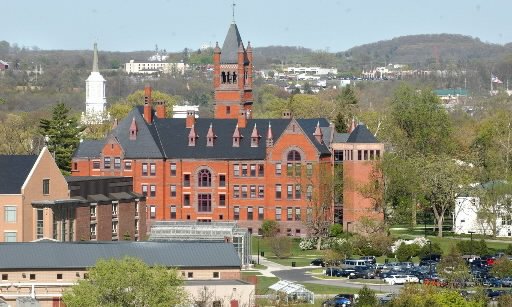 Gettysburg College’s Glatfelter Hall is seen from the cupola of Schmucker Hall on the campus of Lutheran Theological Seminary, the institution that loaned its name to Seminary Ridge of Battle of Gettysburg fame. More on a recent renovation to this stately building, designed by York’s Dempwolf architectural firm a century ago. Also of interest: Shoes, other artifacts found in walls of Gettysburg Seminary Ridge Museum

Cupola Cam stands guard atop the tower at Gettysburg’s seminary. It’s a far more high-tech device than that used by Gen. John Buford, made famous by Sam Elliott in the film “Gettysburg.”

Buford had binoculars. Cupola Cam can pivot 360 degrees, with its view dictated by a remote laptop:

Here’s a description of the scene from on high via the livestreamed site, developed in conjunction with Gettysburg 150.

“On July 1, 1863, Union Gen. John Buford looked out from the cupola atop Schmucker Hall at the Lutheran Theological Seminary to see Confederate soldiers advancing on Gettysburg from the west.

“He directed the federals’ early defenses from the cupola as the Battle of Gettysburg began.

“This camera shows a livestream from the cupola where Buford stood. When the camera’s view is to the west, you can see the woods where Confederates and Union troops clashed, and where Union Gen. John Reynolds was killed. Other views show parts of the seminary campus or the town of Gettysburg.”

– For a live cam battlefield experience from a different angle, check out: Earthcam/Gettysburg. 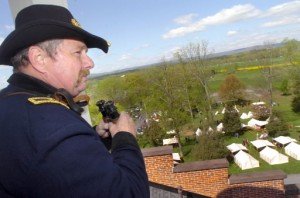 Timon Linn, re-enacting as General John Buford, looks out from the cupola of the seminary in Gettysburg in 2011.