From top dog and hot dogs to dogfight and dog days in York County, Pa. 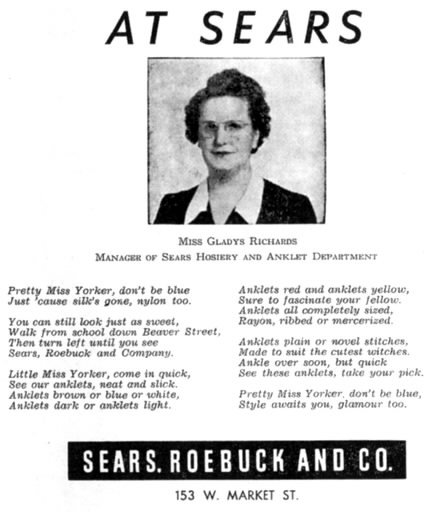 Sears offered an option to girls and women separated from their nylons during World War II: anklets. A decade later, Sears moved from this crowded West Market Street location in York, Pa., to a sparkling new store in the York County Shopping Center. Background posts: Before Geno’s made news in Philly, Gino’s headlined in York, Just try to resist studying this memory-tugging photograph and York scored another first: Wal-Mart’s entry into Pa.

My York Sunday News column on the old York County Shopping Center in Springettsbury Township sparked a round of nostalgic e-mails.
The messages contained a common denominator: The smell and taste of those grilled Sears hot dogs still make mouths water… .

But here’s the good question raised by one e-mailer: “What brand of hot dogs were they?”
Comment below, if you know.
Meanwhile, here’s the column, “From top dog and hot dogs to dog days”:

A York Daily Record article on the demolition of the York County Shopping Center in 1993 noted that the strip mall’s clock had stuck at 20 minutes of 10.
That clock had been frozen for years, a metaphor for the then-moribund shopping center.
The mainspring actually broke four years earlier when Sears moved to the then-new York Galleria.
The story of Sears, struggling financially itself today, is a tale of how one major player can influence a community. Sears’ story also shows how one hot business can rapidly evolve into one that’s not.
* * *
Sears opened with great expectations and over-the-top humility at 149-153 W. Market St. in York.
“There will be no music or formalities tomorrow,” an advertisement said. “The company has concentrated their plans on service.”
Meanwhile, Sears was everywhere. It sold houses via the Sears Modern Homes Mail Order Catalogue. Many of these solid structures stand today.
The company’s inventory even had toilet paper. That is, it distributed catalogues that soon lost pages in outhouses throughout York and Adams counties.
Its store, indeed, serviced downtown customers, but the locally owned Bon-Ton, Wiest’s and Bear’s were widely acknowledged as the big three stores.
By the mid-1950s, Sears saw an opportunity to be the lead dog.
* * *
A post-World War II baby boom caused families to spill from York to form suburbs.
The entry of Caterpillar and other industries in the early 1950s also attracted families to that part of Springettsbury Township.
Haines Acres started sprouting on nearby fields.
Sears saw an opportunity to be lead tenant in a new venture near all this growth: the future York County Shopping Center.
It was the first major downtown store to, well, seek greener pastures. In fact, it opened in 1955, months before the rest of the center.
It became the place to go. In the summer, people traveled to Sears just for the air conditioning and to enjoy the smell of cooking hot dogs, if not the hot dogs themselves.
For years, builder Paul Whiteman had bought equipment at York Paint and Hardware in the city.
“Even in my building trade, if I needed a couple drills, let’s face it, how could I get them any faster?” Whiteman told the York Daily Record in 1993.
Sears and the shopping center fed nearby businesses that formed an incubator for today’s memories: Bury’s, Gino’s and Playland.
“Greater York in Action,” a 1968 publication, provides insight into the order of downtown York’s decline as a retail hub.
The book, published at the time of York’s race riots in 1968 but before the deadly riots of 1969, indicates that major retailers were expanding into the growing suburbs even before the unrest.
The York Area Chamber of Commerce book paints the decision by The Bon-Ton and Wiest’s to open retail stores in suburban malls as an opportunity. It does not delve into the probability that their downtown franchises were slipping, and they were facing major competition from the York Mall, the area’s first covered center opening for the 1968-69 shopping season.
But the York Mall also started taking business away from the nearby York County Shopping Center, and by the late 1980s, Sears was looking across Route 30 at the sparkling Galleria.
Bon-Ton and Penney’s, in the York Mall, took other Galleria anchor slots, giving the new mall the distinction of temporarily disabling both the shopping center and mall. Boscov’s, entering the York County market for the first time, became the fourth anchor store.
But both older centers rebounded.
The shopping center became the York Marketplace, born again with a mammoth Giant on the former Sears footprint and Lowe’s taking the place of several smaller stores.
Wal-Mart soon made its entry into Pennsylvania by consuming a whole south end of the former York Mall.
Sears and the Galleria flourished for some time before locking into a dogfight with Wal-Mart and other suburban power centers.
Sears picked up K-Mart and Land’s End along the way. But the venerable department store chain is struggling, particularly against Wal-Mart.
For years, Sears’ timepiece was always running fast. Now, Sears’ clock has not stopped, but its spring is in need of winding. 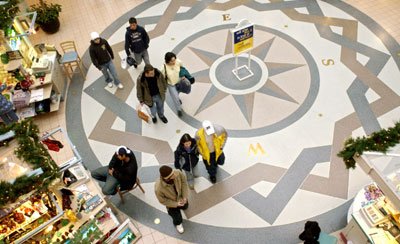 The Galleria in Springettsbury Township.
STORE MIGRATION
Here’s the order of migration of retailers from downtown York to the suburbs, according to the book “Greater York in Action”:
— Sears opened as the anchor tenant in the York County Shopping Center in 1955.
— The rest of the shopping center opened in 1956, the first such venue in the York area.
— Bon-Ton opened a store at the North Mall, the center where Off Track Wagering is located today, in August 1968.
— The York Mall opened in late 1968.
— In 1968, Wiest’s planned to open its first branch store in the North Mall Shopping Center.
— Specialty shops also prepared to expand to suburban shopping centers. Gregory’s planned to open its first such store in 1968 at the York Mall. Newswanger’s planned a suburban store along Lincoln Highway East.
Further, the opening of the Wright’s Ferry Bridge in 1972 gave York County residents easier access to shopping centers in Lancaster County.
Summary point: Some blame the riots for the demise of the downtown. But “Greater York in Action” unintentionally indicates that pinched downtown retailers were scrambling for new customers even before the negative force of the racial unrest took hold.
Still, few would question that the riots expedited retail movement to the suburbs.