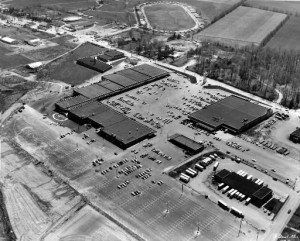 This photo, courtesy of J. David Allen & Son, of York, Pa., was taken in the late 1950s. It shows Springettsbury Township’s York County Shopping Center in full operation. The shopping center was the first of its type in the York area, and Sears, Roebuck & Co., the large building at right, was the first major retail business to move from York’s downtown. PACE Resources Inc./Buchart Horn Inc. used the photo as part of an exhibit at the York Business Expo in 2005. Background posts: Just try to resist studying this memory-tugging photograph, Bury’s burger memories far from buried, From top dog and hot dogs to dogfight and dog days in York County, Pa.
Continuing the series of telling York County, Pa.’s, history through images: … .

In plain view: The new York County Shopping Center, which opened in 1956, sprawls along the old Lincoln Highway, running horizontally across this photo, east of the Old East York neighborhood. Before long, it was surrounded by Caterpillar, Haines Acres and Gino’s, Bury’s and other service businesses benefiting from the crowds it attracted.
Behind the scene: As the years passed and the York Mall joined the shopping center in the late 1960s, York’s downtown businesses felt a decline in their cash registers. Several formulated plans to follow the customers to the suburbs, eventually closing up their stores in the downtown. Then, the race riots of the late 1960s deterred people from coming downtown, and some never returned, even by 2008. Meanwhile, the new Wright’s Ferry Bridge, carrying a four-lane Route 30 by-pass over the Susquehanna River in the early-1970s, opened shopping opportunities for York County residents at the Park City Mall and elsewhere in Lancaster County.
Further details: “Greater York in Action,” a book published by the York Area Chamber of Commerce in 1968, tells about the pivotal decisions made by local retailers to locate stores in the suburbs in the mid- to late-1960s.