Springettsbury Township’s Schultz House, one of York County, Pa.’s, oldest structures, will undergo renovations to restore it to what is believed to be its original 1700s appearance. Here, Brian D. Ports, a partner with Williams & Ports Architecture & Design in York, shows off the attic of the historic house. (See additional photo of the other end of the house, the basement, below.) For more details, see the York (Pa.) Daily Record/Sunday News story on the renovations. Background posts: A virtual photo tour – and an actual tour – of York County’s vintage Schultz House, Old Schultz House might be younger than its datestone, Camp Security combines history, beauty.

Glenn Winter passed on the following information about an upcoming presentation by his brother, Dr. John Winter, professor emeritus of philosophy at Millersville University and a native Yorker.
The topic: “Finally: The Secret that Caused the Battle at Gettysburg.”
Here are excerpts from Glenn Winter’s release:

On September 30, 1777, the Continental Congress met in a small Pennsylvania town west of the Susquehanna River and stayed for nine months, fabricating and pinning down laws for a new nation with the Articles of Confederation and Perpetual Union that lasted eleven years but influenced what happened “four score and seven years” later. This event put York on the map. Not by chance, but by choice.
On June 28, 1863, advance troops from General Robert E. Lee’s Confederate army occupied York, the largest Northern municipality captured by the South in the Civil War. Was it by chance, or by choice?
As a youngster, he (John) was intrigued with the invasion of York and fighting at Gettysburg. Professorship at Millersville University later availed him the opportunity to research the intensions of General Lee in the invasion of Pennsylvania. Official Civil War records of the Union and Confederate armies clearly established for Dr. Winter that when the South invaded Pennsylvania, it never intended an all-out battle such as occurred at Gettysburg July 1-4, 1863.
If not a battle, then what did Lee intend? Further research disclosed that the July 28, 1863 edition of the Richmond VA Daily Dispatch (page 1, column 1), contained an editorial about General Lee’s secret plan and campaign for the invasion of the North. The editorial called the plan, “One of the wisest, grandest, most imposing schemes ever conceived by the mind of man.” This passage along with occupation of York, and the fact that no one intended a battle at Gettysburg, prompted Dr. Winter to search for the real reason Lee invaded Pennsylvania.
His presentation, part of an adult learning opportunities series in Lancaster called “Heritage & Horizon,” will reveal the results of his research at 9:30 a.m., Oct. 19. Enrollment is only by postal mail to Heritage and Horizons, 1850 Marietta Ave., Lancaster, PA 17603.

Weblink of the day: The ABCs of York County, telling about many of York County’s icons like chicken corn soup and Fasnachts, is available at map. (The poster is offering in four sizes, with escalating prices. Customers should order the huge or large size. Anything smaller will not be readable. )
Recommended blog post: Yorkblog’s Bookbuzz previews the upcoming York Book and Paper Fair.
Forum of the day, The Exchange: Add to the list of famous sports stars from York County.
Also:
– All York Town Square posts from the start. (Key word search by using “find” on browser.) Or search via Google.
– All Linked In/Neat Stuff posts from the start.. 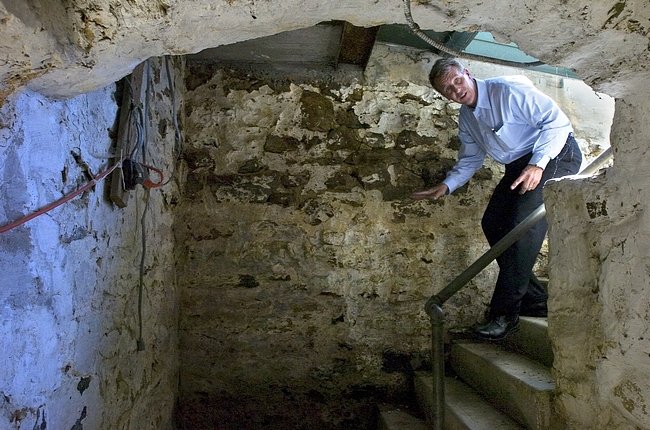 Brian D. Ports, in the root cellar of the Schultz House, pointed out that the grading around the Schultz House has changed. Cellar vents, used to regulate the temperature, were covered over years ago. (Photos by York Daily Record/Sunday News.)