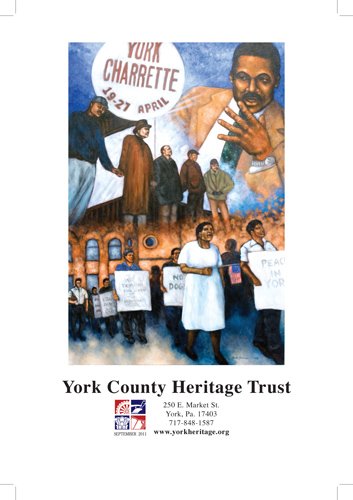 The York Charrette gets high billing in the mural “Civil Rights Heroes of York.” Some believe the 1970 charrette headed off a third summer of violence forecast by a series of stabbings at William Penn High School. This image appeared on the back of the 2011 scholarly journal published by the York County Heritage Trust.

When it comes to school violence, York County history immediately points to a machete-wielding madman and a troubled teen who launched attacks in separate incidents in Red Lion schools.

But school violence hit the county long before these 21st-century assaults, elevated again because of the assault this week at Virginia Tech.

In early April 1970, William Penn High School and all city schools shut down. The closure occurred after the stabbings of three students at the high school… .

The violence was reason enough for the lockout, but they were a symptom of a greater problem. York had experience two summers of rioting catalyzed by racial unrest.

Did the stabbings portend a third bloody summer?

To head off that possibility, concerned citizens launched a charrette, a series of meetings to explore reasons behind the disturbances and attempt to look for solutions. I explained that landmark event, titled Charrette or Charade? in a previous post. The York Charrette was controversial then, and still has its detractors, but as I’ve noted before, the summer of 1970 was calm.

And for the record, here’s a sketch of the Red Lion Area School District tragedies:

— Feb. 2, 2001: William Michael Stankewicz, 56, attacked the principal, two teachers and 11 children with a machete at North Hopewell-Winterstown Elementary School. Stankewicz was later sentenced to 132 to 264 years in prison.