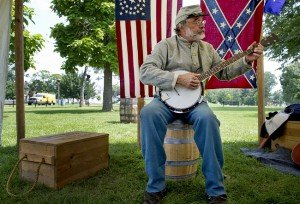 Mechanicsburg’s Matthew Dodd performs at the Pennsylvania Civil War 150 Road Show last week. The show continues at York, Pa.’s, Penn Park from 9 a.m. to 5 p.m. today. The exhibit is set to visit all 67 counties in the state in its four-year run.

More than a few people Saturday taking in the Pennsylvania Road Show remarked about the beauty of Penn Park.

For some, it was their first visit in years. Others had never been there.

The park is full of monuments, wide sidewalks and history, and civic officials hope to return it to its rightful position as a go-to place in this city.

Some civic leaders are seeing Pennsylvania’s Civil War Road Show as the first step in a long recovery for largely neglected Penn Park.

The portable museum, on exhibit from 9 a.m. to 5 p.m. today at the park, is an appropriate start.
The 53-foot trailer focuses attention on the 150th anniversary of the Civil War, and Penn Park was a prime point of local activity in the war’s four years.
And the park, granted to York from William Penn’s heirs, also played a role in numerous events remembered by history before and after that bloody war.
+++

Here is a sampling of 10 memorable Penn Park moments:

1781 – Continental Army troops in the American Revolution passing through York camped at the park — then the public common, Penn Common. The best-known was Gen. Anthony Wayne’s command. The troops stayed there while “Mad” Anthony recruited troops and gathered supplies before marching south to engage the British.

1827 — Former slaves from Virginia disembarked in the park. “One moonlight night in the month of May 1827, two wagons rumbled into West York from the Southland .¤.¤.,” The York Gazette reported. “They were brought here .¤.¤. and unloaded on the York Common.” This was an early event that gave the park a special lasting place in the minds of York’s black community.

1861: Soon after the Civil War began, Penn Park served as a drill site to season green Union troops. The old York Fairgrounds served as the main campsite for those recruits. Units would march from that site, southeast of East King and South Queen streets, to Penn Park. Those with bands played, as Yorkers lined the street.

1861: Late in the year, about 1,000 Union soldiers from the 6th New York Cavalry Regiment wintered in York. Barracks and other buildings later went up to house the horsemen.
1862: The U.S. Army Quartermaster Corps examined the cavalry unit’s former digs with an eye on dismantling them. The inspectors found the structures so substantial and the park’s proximity to the South so promising that they determined the cavalry quarters could be expanded into a military hospital. The U.S. Army General Hospital started treating wounded soldiers that summer.
1865: The military hospital closed and was later demolished, despite efforts by some on the community to make it permanent. But others opposed its continuation, prompting the hospital’s newspaper, the Cartridge Box, to opine: “But those who are opposed .¤.¤. have never had any special love or affection for Union soldiers.”
1898: The towering Soldiers & Sailors statue, designed by the noted York-based Dempwolf architectural firm, was dedicated. To this day, it remains the most visible York-area commemoration to those who served in the Civil War.
1946: A War Mothers monument was dedicated honoring those who served, were wounded and died in World War II from York County. The beautiful, but largely unknown monument stands in the park’s center today bearing the inscription: “We mothers are proud of our sons and daughters who won peace and freedom for the world. Guard well this heritage for the mothers of the future.”
1968: A large gathering assembled in memory of slain civil rights leader Martin Luther King Jr. A minister, the Rev. John Blackwell, told the gathering: “I have a nightmare. Could we find men here today who really believe in non-violence?”
1968: The park served as the epicenter of an ongoing clash between black youth and York police.
That unsettling summer was part of the buildup to the deadly race rioting in July and August of 1969.

+++
The road show is an appropriate way to begin the re-discovery of Penn Park .
A York Daily Record story last week told of big plans ahead.
Those plans include a $600,000 playground installation next year under the Bring on Play umbrella. Plans call for the investment of
$5 million to $6 million for a pavilion and other buildings.
Big plans when money is tight.
One of those buildings would include an exhibit or museum telling the park’s history. Indeed, Penn Park holds many stories to tell.