Same shoe size, but Haines Shoe House is re-laced for the public to visit

You can see from the hundreds of likes, shares and comments on this York, Pa., Daily Record Facebook post that the Haines Shoe House, under new ownership and selling baked goods and more, has caught the interest of the public. (Feel free to join in). Mahlon ‘Shoe Wizard’ Haines built the Springettsbury Township roadside wonder in 1948 to serve, among other things, as a honeymoon place. It has become a symbol of York County, one of those places that people like to drive to and marvel. Now, there’s more of an opportunity to drop in. The new owners have expanded the attraction’s hours, plan tours and, as important as anything, will serve York County-made Beck’s Ice Cream. Check out the Shoe House’s Facebook page for details. Also of interest: Hallam’s New Year’s shoe drop: Brings York County’s Haines Shoe House to new heights and What is the Shoe House’s shoe size?

The 62-year-old two-time NFL Coach of the Year made history in his appearance at William Penn Senior High School.

“I don’t consider myself any different than all my friends, just have a little different job title,” he told students. “Doesn’t make you any more special,” he said after his appearance. “To be able to come back and talk to the kids at York High really hit home with me. Because I was a kid on the streets, and it didn’t all go well, but as long as you dream and fight you’ve got a chance.”

All in one room: Another old school preserved 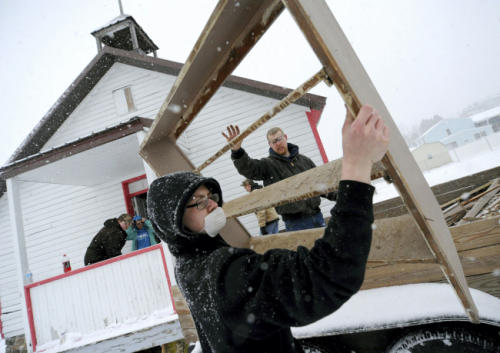 This old one-room school, near Red Lion Area High School, was in the Warner family for years. The Neff schoolhouse has since fallen into disrepair but Red Lion students are taking care of that. For a story and photo gallery, check out: One-room school.

History Mystery: Can you ID this hilly town?