Rural York County, Pa.: A lot happened in this one spot 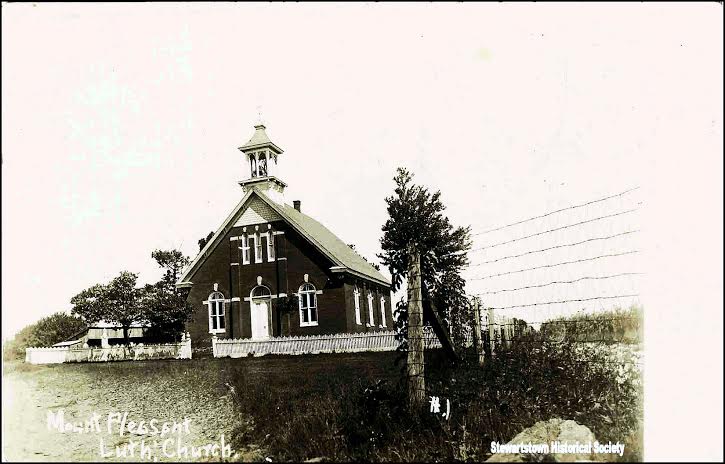 Check out this old postcard photograph of the Mt. Pleasant Lutheran Church, courtesy of Stewartstown Historical Society’s Doug Winemiller. That building sat in a peaceful setting on Route 24 between Winterstown and Stewartstown in Rinely, opposite its successor, St. Paul Lutheran Church. Doug located the church, whose congregation was organized in 1857, in front of the cemetery. “A monument marks the spot of the cemetery,” Doug wrote. A Baptist Church now meets in the former St. Paul Lutheran building, which is also a story.  The story of Mount Pleasant/St. Paul’s shows change, even in a rural area in which some folks think things never change. One church building went up and then came down. In its lifetime, its union church status, housing Lutheran and Reformed denominations, dissolved, according to the book ‘York County Lutherans.’ Another building went up across the road, St. Paul, in 1926, the book states. And then its denomination or church affiliation recently changed from one of York County’s original congregations – Lutheran – to that of a relative newcomer, Baptist. Also of interest: Another St. Paul’s – Dub’s near Hanover – is York County’s last union church.

Tom Kerrigan gave a brief history lesson about the popular You’re Probably From Glen Rock If … page over the weekend – on that page, of course.

This group was started about July 7, 2013. Barbara A Gamble was the very first one to join . Then Denise Sater Wildasin started a New Freedom page. Her mother, Dagmar Maryann Wirz is like the ” Walter Cronkite” of the New Freedom page. Bridget Orwig Eckrote started a Shrewsbury page. Jeff Rohrbaugh is involved with Shrewsbury and makes many comments on all 5 pages. Bob Nicklow, Darryl J. Engler & many others have been helpful in verifying facts and sharing informational links. Then I made a page for Railroad and Seven Valleys. In October the York Daily Record did an article about these groups and their popularity and sudden growth. Less than 6 months later, the total number of group members for all 5 towns is 2,415. About 48% of the members are in the Glen Rock group. ( I think that is because Susquehannock is in Glen Rock. ) I still pinch myself when I see the numbers. Thanks to all for keeping this venture alive. I feel like it’s Mayberry all over again.

Happy birthday, Fed: The Fed is 100 years old this week. If you ever wondered how it was founded, check out: Federal Reserve.

Mr. Gower’s Pharmacy: No, this scene is from Red Lion, Pa. But to learn about a town that claims to have informed the Bedford Falls portrayed in “It’s a Wonderful Life,” see: Seneca Falls, N.Y. More on that discussion below: