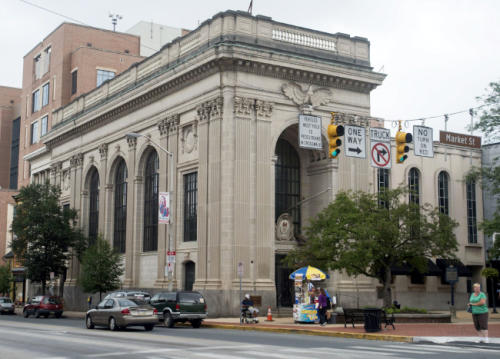 This landmark Continental Square building in York started as First National Bank in the 1920s. It weathered the Depression and then its signs changed several times over the years. Citizens Bank was the last shingle to hang there, removed in 2012. Now developer Derek Dilks is looking to give the building new life, planning a restaurant and apartments. That would represent a major change of life and activity to York’s main square, which has experienced much life and activity since the town was founded in 1741. Also of interest: When will the lights come back on in this Continental Square building? and See the art treasures inside old First National.

The significance of bringing the old Citizens Bank building back to life perhaps has been overlooked with news of all the other development going on around York, Pa.

That corner of York’s square has been the site of important buildings since York’s earliest years, even housing the treasury department in the home of Archibald McClean when Continental Congress met in York in 1777-78.

And considering the current building’s design and prominence, people would notice if the lights stay on at night in this stately building with big windows.

Here are 6 more views of the building, insight and out, past and present: 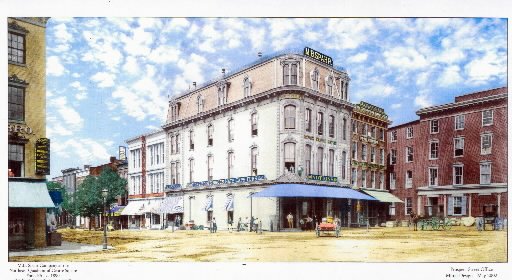 Before First National Bank built here, this corner was home to M.B. Spahr Company, seen here this circa 1890 photograph. This photo was colorized and enlarged as a mural seen at the Prospect Street office of another bank – Metro Bank.

If you’ve ever wanted to see the main room of the old bank, here it is. There’s a lot to see here, from the unusual ceiling design to the walk-in safe. These interior photos, from the York Daily Record, came from a recent tour hosted by developer Derek Dilks.

This room is behind the safe deposit boxes in the main vault. Interesting, you have safes within a safe. That would have given a burglar double duty.

Another look at the safe deposition boxes. It doesn’t appear that the departing bank left anything behind.

Yes, First National Bank or its successors shopped locally. Check out this Media Center, from the camera of the YDR’s Paul Kuehnel, for more photos of  the Citizens Bank tour.

A big goal of the recent tour was to afford a look at stained glass art still in the building. This art is the legacy of noted Yorker J. Horace Rudy. We’ll have an in-depth look at the Rudy art in the building in a future post.