What is the highest peak in York County?: Linked in with neat York County history stuff, April 6, 2012

But Roundtop Mountain is in a class of its own, an isolated peak.

So says the “Catechism of York County, 1925,” used to teach children about York County’s history and geography.

Here’s its description of the hills and dales in northern York County:

“A ridge of the South Mountains enters the northwestern part of the county and ends above Dillsburg. A spur of these mountains extends across Fairview Township and down along the Susquehanna. Round Top … and its quiet neighbor Knell’s Hill, are isolated peaks in Warrington Township. The Conewago Hills, isolated ridge of South Mountain, terminate at York Haven.”

Round Top might be an isolated mountain, but its never alone. People flock there for skiing, but also to warm weather events as well. 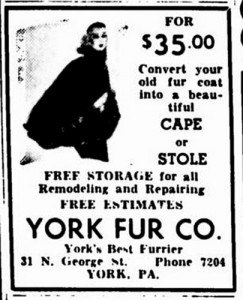 Fur from Bear’s: Steve Smith is looking for information on the York Fur Company.

“I recently had a grandmother pass away and we inherited a fur coat that I think was purchased at Bear’s department store and by the label it was made by the York Fur Company in the 1950’s,” he wrote. “My internet searches have turned up only a single hit which was in the Gettysburg Times on June 6, 1952.”

I directed him to the York County Heritage Trust library. If no files exist there, chances are that such ads have been placed in city directories available there.

The results are in: Want to see how people voted on what to do with the threatened Hoke farmhouse in Spring Grove? Go to the bottom of this York Town Square post. Actually, you can keep voting. The unscientific poll will be operable for a year.

Why two holes? That question was asked and answered as it relates to outhouses in this piece by Lauren Boyer of the YDR/YSN.

Hitting Glen Rock’s streets:  The Glen Rock Historic Preservation Society will present a walking history about the Heathcote Woolen Mill which became the Glen Rock flour mill and is currently the Glen Rock Mill Inn. That tour is planed for 2 p.m., Sunday, May 6. This walking tour is being presented for the 175th anniversary of Heathcote’s purchase of the ground and the start of his mill. For details, contact John Huffnagel: glenrockotts@comcast.net.

Forum of the day: You know you’re in an area that still has agricultural might when you see Exchangers talking about the best butcher shops around.

Check out these aerial photos from around York County.