Bottle & jug enthusiasts must dig for their York County gold 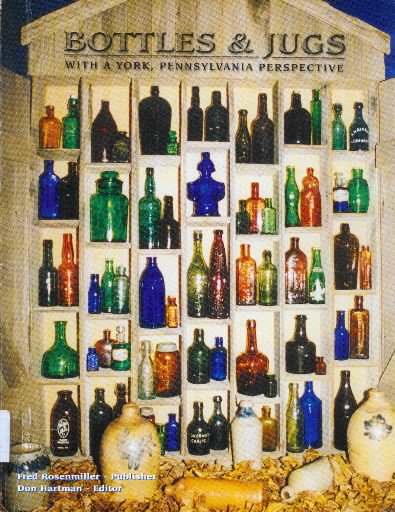 Fred Rosenmiller was publisher of the undated (probably late 1990s book) “Bottles & Jugs, With a York, Pennsylvania Pespective.” Rosenmiller recently said he would donate scores of bottles from his collection to the York County Heritage Trust. (See photo below.) Background posts: Good stuff found in ‘Codorus Valley Chronicles’, Where do you go for one-stop shopping on York County history, Hart-Krafts: ‘Most of the trucks were used and abused’.

Fred Rosenmiller, whose massive and valuable bottle collection will go to the York County Heritage Trust, gave away some of his collecting secrets in his book “Bottles and Jugs.”
One route is to dig… . 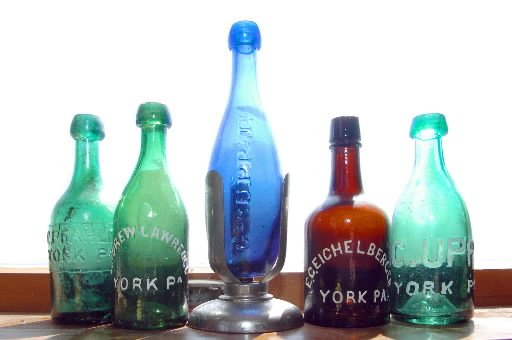 Fred Rosenmiller’s collection includes old liquor, soda and medicine bottles with York connections. The book he published, “Bottles & Jugs” is available at the York County Heritage Trust.
“The obvious digging places are the dumping grounds of the past, usually in out-of-the-way places in ravines, sink holes or wooded areas,” “Bottles & Jugs” states. “Not so obvious are the filled-in outhouse pits, cisterns and wells of old houses.”
The book explains that in the past municipal government did not collect trash so it was every homeowner for himself in disposal. If an outhouse pit, well or cistern was no longer used for its original purpose, it became a suitable place to dispose of trash.
Such are ground zero spots for bottle collectors.
Of course, the book gives tips for less ambitious collectors. Yard sales, for example. And antique shops.
Here is York Daily Record/Sunday News reporter Teresa Boeckel’s story on Rosenmiller’s donation:

One of Fred Rosenmiller’s favorite bottles from York County is a George Upp Jr. cobalt blue ten-pin that dates back to about 1860.
The soda bottle, which resembles a bowling pin, was not wide enough at the base to stand on its own. So the bottle was placed into a metal stand to hold it.
“These are quite rare,” Rosenmiller said as he showed off pieces in his collection recently. “They’re hard to find, and I like the cobalt blue.”
He also has a Kopp’s “Baby’s Friend” medicine bottle, which contained alcohol and now-illicit drugs. If it didn’t work for a teething baby, the mother could drink it.
And he has numerous liquor bottles, including ones from the well-known Foust distillery just outside Glen Rock.
Rosenmiller, whose collection of Americana includes antique cars, a 1950s diner counter and vintage signs, has made provisions in his will for some artifacts with York County provenance to be donated to the York County Heritage Trust.
The donation involves several hundred bottles and a fully-restored 1917 Bell Motor Car. He wants to ensure that these bygones stay in York County for others to appreciate.
“I’ve enjoyed the collecting process and (would) hate to see it dispersed all over again and particularly get out of the area,” he said.
For example, some people on the West Coast just collect ten-pin bottles, and “they could end up in California . . . and never be seen in York County again,” he said.
Rosenmiller is hoping others will follow his lead. He’s the first member of the Heritage Trust’s Lewis Miller Society, which recognizes people who donate items or make contributions through planned giving, said Gail Bowman, development coordinator.
The society is named after folk artist Lewis Miller, who left behind journals depicting everyday life in York County.
“We’re encouraging others to do the same thing because that’s the way they get preserved,” he said.
The Rosenmiller Family Foundation already has donated a 1911
Hart-Kraft light delivery truck to the Heritage Trust. The restored truck is believed to be the last existing vehicle produced by the Hart-Kraft Motor Company.
Hart-Kraft was one of numerous automotive companies in York. It built cars and trucks from 1908 to 1913 in a building where Sovereign Bank Stadium in York currently stands.
Donations to the Heritage Trust allow people to have a better understanding of York County’s history, president and CEO Joan Mummert said.
In this case, the artifacts reflect the history of manufacturing in the area – a way of life that York County is moving away from, she said.
Rosenmiller said he’s always been interested in history and the preservation of it.
While he was growing up, he collected baseball cards, stamps and coins. He lost touch with his hobby while in college, but he picked it up again after getting out of the Navy.
He’s collected cars, bottles and other kinds of memorabilia over the years.
Rosenmiller said he built his collections over the years through word-of-mouth and co-writing books, such as “Bottles & Jugs with a York, Pennsylvania Perspective.”
He would receive calls from auctioneers. He’d barter with other collectors. And on occasion, he would hear about an item at a yard sale and head on out.
Rosenmiller has built his collection over 50 years, and he plans to pass much of it down to his four daughters. It’s his wish that they keep the artifacts, but if they decide to sell, he’s requested that
they do so locally with those of York County provenance.
Many families pass down York memorabilia from one generation to another, but sometimes heirs see these pieces of history as a financial gain, which is understandable, Mummert said.
But the Heritage Trust hopes that families would consider donating the items “so future generations can learn about the history of the region,” Mummert said.
At one time, the Heritage Trust had a fund to buy items that go up for sale, but it was depleted with the purchase of a 1937 Aeronca K Airplane – the first one to take a family from York County on a transcontinental flight. It cost $20,000 and is on display at the Agricultural & Industrial Museum at 217 W. Princess St. in York.
The Heritage Trust is trying to build up that fund, said Jennifer Hall, director of exhibits and collections.
The exhibit and collections committee, which Rosenmiller serves on, will review his donations when it receives them.
The committee only accepts items that are needed for the collection, and it will most likely want what he has to offer, said Rosenmiller, who also serves on the board of directors for the Heritage Trust.
At one time, 15 car companies existed in York County, and the Heritage Trust only has examples from four of them, Hall said.
The 1917 Bell Motor Car, which Rosenmiller loaned to the Heritage Trust last year, would be a “wonderful” addition because it “would fill that void in our collection,” she said.
The company was in the 200 block of North George Street in York.
It’s the only Bell Motor Car in existence that employees of the Heritage Trust know of, Hall said.

Fred Rosenmiller with part of his collection.