Rocks in the Glen turns into town where things happen, Part III 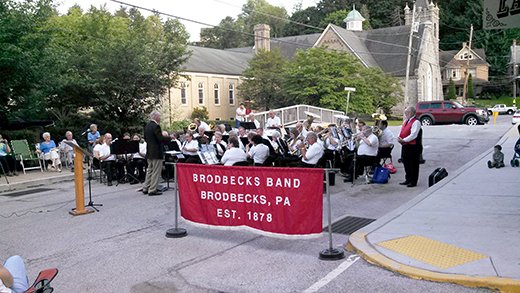 Glen Rock, Pa., residents experienced a retro weekend recently, with the return of the music of one of its most famous citizens and the return of a train to the town’s well-worn tracks. Here, Dr. Lee Zelley, grandson of famed ‘Parade Music Prince’ Roland F. Seitz, conducts the Brodbecks Band in performing Seitz’s best known work ‘Grandioso.’ Background: Glen Rock’s Roland F. Seitz: ‘By his genius … he has earned the title of ‘Parade Music Prince’. 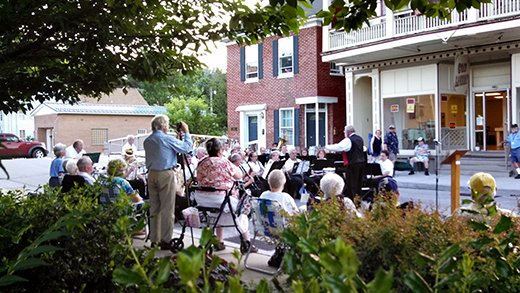 The concert took place on the street outside Seitz’s longtime house (brick house in background, which is marked by a plaque), where the composer wrote  his marches. The Glen Rock Historic Preservation Society sponsored the event that brought together Seitz, his family, his place in his hometown and the world and a band typical of those who the composer had in mind in writing his marches. Background: Parade Music Prince Roland Seitz: From Glen Rock to Friday Night Lights. 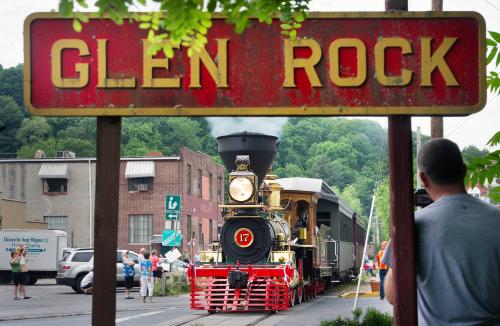 That same weekend, Glen Rock welcomed the return of steam locomotive No. 17 in its first Steam into History run from New Freedom to Hanover Junction. Glen Rock was built around and along the railroad – the Northern Central Railway in the 1800s – but its tracks have been empty for about a decade since a dinner train went out of business. Also of interest: Part II: Rocks in the Glen turns into town where things happen.