When a York, Pa., Santa smelled like Noxema and witch hazel 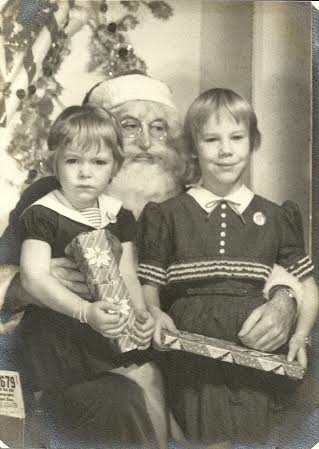 This photo is framed and hangs in the homes of York County, Pa., sisters Joan Bitzer and Carolyn Fink Mosser. It is part of a story that crosses several icons from York County’s past – the Christmas shopping season, Santa’s arrival in York via airplane and his climb up the ladder to Bon-Ton. More about this story below. Also of interest: Strathmeyer Christmas Tree empire began with small York stands and now sells all over East.

“A friend sent your blog info to me after she saw the attached photo that I sent to her.

“My sister, Joan Bitzer, and I have fond memories of going to downtown York all year long when we were children, but we had very special memories during the Christmas season.  One particular year as we recall, our parents took us to the Thomasville airport to see Santa arrive.  We then came to downtown York where we believe Santa was transported perhaps via a firetruck.  There was a huge crowd watching Santa climb the ladder of the firetruck into the 3rd floor of the Bon Ton Dept. Store.  He stopped and waved to everyone.  We then recall waiting in line to visit with Santa, telling him what we wanted for Christmas and then posing for the attached photo (see above).  I think this was 1959.  To this day we remember saying to our parents that Santa smelled just like our Grandfather….we smelled Noxema and witch hazel.  It was many years later when our parents told us that the Santa that day was our Grandfather, Ellis Fink.  Such a special memory and we both have the photo framed in our homes.”

There’s a postscript to this.

After I got in touch with Carolyn, she emailed back:

“I also emailed it to my cousins and have been getting some interesting feedback…my one cousin said her mother (Santa’s daughter) was very concerned that someone his age would climb the ladder, esp. since there was a brisk wind that day.”

I guess if you ride sky high with a sleigh pulled by reindeer, climbing a couple of floors on a fire ladder on a windy day is more than easy. 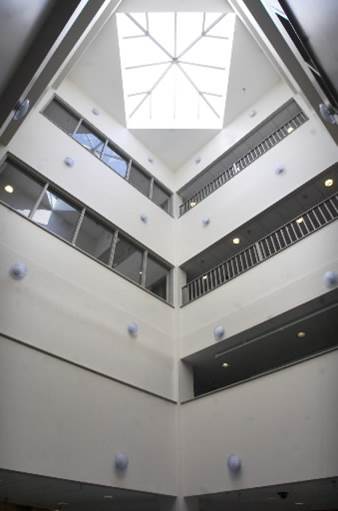 The old Bon-Ton building is now a county office building.

You’re aware of model railroad train layouts running this time of the year. But those looking for some holiday fun can go to a real railroad station decked out for the holiday.

“Visitors will be able to view an early 20th century small town train station waiting room and ticket agent’s office,” a news release from the railroad states. “A collection of historical artifacts from the Stewartstown Railroad is on display at the museum.”

The railroad will also be offering speeder car rides as part of the open houses, weather permitting, the release states.