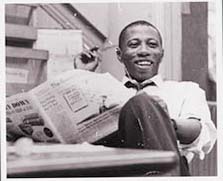 Robert Maynard at his desk at the York, Pa., Gazette and Daily in the 1960s. The noted newsman received his journalistic break at the J.W. Gitt-owned newspaper. The feisty newspaper rejected Barry Goldwater advertising in 1964. A newspaper could reject advertising that advocated things bad for a person’s health, Gitt reasoned. And he put Goldwater in that category.

Bob Maynard, the York Daily Record/Sunday News’ most illustrious alumnus, continues to make the national news years after his death.

Maynard started his newspaper career in the 1960s when the Daily Record was known as The Gazette and Daily. No other daily newspaper would hire the young black reporter, but he and J.W. Gitt connected, and the rest, as they say, is history… .

He went on to the Washington Post and later owned the Oakland Tribune.
Daily Record alumni are working at the New York Times, Philadelphia Inquirer and Baltimore Sun. But none have achieved national prominence on the level of Bob Maynard. Unless, in his day, it was J.W. Gitt.

Bob Maynard’s name has appeared in columns and Daily Record news stories over the years — including on the occasion of his reception of an honorary degree from York College in the 1980s — but the following is perhaps the best we’ve done: ‘His credentials were his work.’

The Robert Maynard Institute for Journalism Education keeps his legacy alive by training journalists of color and helping the news media reflect the nation’s diversity.