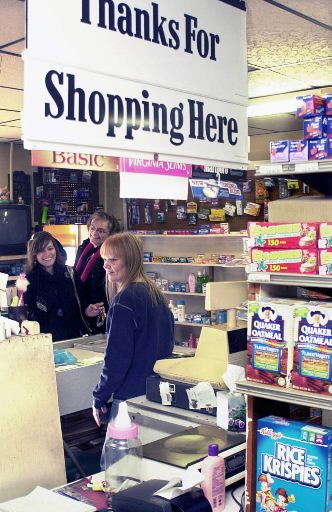 The Menges Mills Market is a throwback to old York County. There, customers can still buy fresh, custom-cut meat. The market has also played host to a famous customer – Richard Nixon. York County parks seeking mementos (see a picture of Nixon at the park) and What did Richard M. Nixon and Tiny Tim have in common?

He had a direct connection to York County, over and above the park near Jacobus that bears his name.
His parents lived near Heidelberg Township’s Menges Mills, and his brother, Edward, attended West York High School.
And he visited the Menges Mills Market, a moment its owners still remember.
York Daily Record writer Nicki Lefever wrote about the market, a piece of York County’s past, as well as Nixon’s link there in a recent piece (1/15/08):

A man with a jacket tied around his waist wearing work pants and boots placed a jug of chocolate milk on the old countertop.
“A pack of smokes, hon.”
Kathy Tawney, 50, reached into a white cabinet and pulled out Marlboro menthols.
At Menges Mills Market in Heidelberg Township, it’s not uncommon to get what you want without specifically asking for it. Tawney said many customers are regulars.
The shelves are stocked with everything from pie crusts and pasta, to cleaning supplies and greeting cards all tagged with orange stickers from an old pricing gun. Original wood floors and on-site butcher Rick Messinger give it a nostalgic feeling. Kids like the penny Tootsie Rolls and the 25-cent ice pops.
Covered in a white coat with brown and red splatters, Tawney’s brother, Sam Myers, said all the meat is fresh, wrapped in brown paper and never packaged in Styrofoam trays and plastic wrap.
Pickups line the parking lot as locals stop in for a can of chew, a few slices of American cheese, a candy bar or a deli sandwich.
Owner Sterling Myers said people keep coming back because shopping there is not a rat race. Shoppers can enter the quiet store and get what they need without fighting a crowd.
After 13 years as a maintenance man at Glatfelter in Spring Grove, Sterling was tired of his job; so he and his wife, Dot Myers, opened the store in April 1967.
“I always thought I wanted to be a butcher,” he said.
His co-workers at Glatfelter said he would be back on the job in three or four months.
Always a hard worker, Sterling rose to the challenge. He bought the building from Carl Stambaugh, who operated a general store and the post office. Sterling quickly learned the cuts of meat from a local butcher.
The store survived six months, then a year. It even had a famous patron. President Richard Nixon stopped in the store while he was visiting his parents who lived a half mile from the store on a farm on Old Hanover Road.
Sterling eventually bought the 350 acres that Frank and Hannah Nixon lived on and farmed corn, soy beans, wheat and hay. Sterling and Dot’s only son, Sam, now lives on the farm.
Now 80, Sterling still works seven days a week and helps with the farm.
Not only does he like to work, he said he learned early on in the Marine Corps that you can do anything that you make up your mind to do.
Sterling’s daughter, Tawney, is in charge of the ordering. Some larger food companies have dropped the store because they don’t order large quantities frequently enough to make it worth the vendor’s time. But local companies, such as Martin’s Potato Chips, are still willing to supply the store.
Tawney remembers when Martin’s owner and his son used to come in the company’s only truck. She started working at the market after school when she was 10 – sweeping the floors, dusting the shelves and stocking the soda machine. Sam helps with the butchering and Sterling and Dot’s other three daughters fill in on occasion. The only other employee is Messinger.
Kenneth Hogue, 74, of Springettsbury Township, stopped at the market on the way home from his daughter’s house in Spring Grove recently. He heard they had good meat.
“We got burger,” he said, “and the sausage was wonderful.”
Hogue said in an economy based on bargains, it’s nice to shop at a place that, despite being a bit more expensive, is a little more personal and reminiscent of his childhood days.
As long as his health allows, Sterling will continue to run the store. Tawney said it gets harder and harder every year, but Sterling will never retire. He just keeps going because he doesn’t know any better.
The store takes cash and checks, no credit cards. The 15-year-old cash register has a few glitches, but Tawney said the cash register salesman said the newer ones are too high tech for what the store needs. Instead of a scanner, it has the original belt on the green counter that Sterling bought when he purchased the store. That throws some younger people.
Tawney said Dot waited on a little girl and her grandmother. The little girl picked tic tacs and after Dot punched the amount into the register, the grandmother told the little girl she could take them. Because they weren’t scanned, the little girl didn’t think they had been paid for.
There is always a sandwich to make, a shelf to stock or a customer to serve, but having it as a family business makes it easy, there’s always someone to help in a pinch because they all live within a mile of the store.
“People just love it here,” Sterling said, “or they wouldn’t come back.”