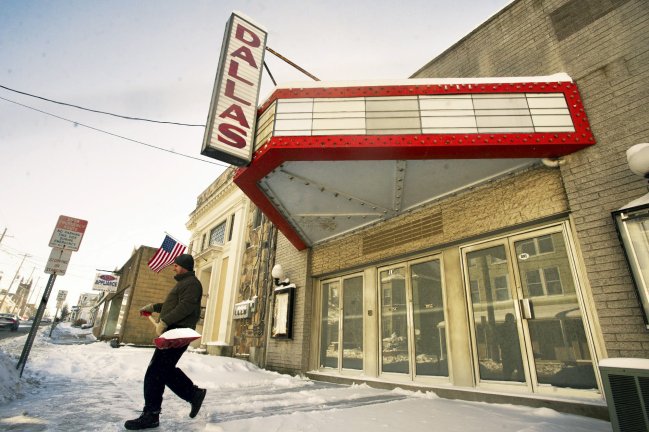 Another snow storm gave York, Pa., Daily Record/Sunday News photographer Paul Kuehnel an opportunity to make a two-fer photo: People dealing with the snow and and update on the old Dallas Theatre. Paul reports that Dallastown’s The Graphix Loft plans to restore the marquee – new lighting and fresh paint. The silk screen business, planning to relocated to the old theater this summer, deals with custom design and logos and all such. A company like that needs a good sign, and there could be nothing better than a former movie house marquee. Also of interest: Inside photos of the Dallas Theatre when it operated as a movie theater.

Gibble’s potato chips will soon be back on store shelves.

The venerable brand shut down a couple of years ago. But they’re coming back.

A Chambersburg Pubic Opinion story says the Gibble’s snack food line will be re-introduced in this order:

Best of blogs: Stephen H. Smith, over at York’s Past, posted an interesting graphic about industrialist S. Morgan Smith’s legacy. Check this out: The begats.

Neatest of all stuff: A blogger receives many rewards. But none greater than receiving word that you’ve helped someone discover something about a topic. In this case, it’s a story of a community.

As you can see below, I asked on YDR’s Facebook page about a famous visitor to the Menges Mill Market. Shannon Yohe Connell was one of many responding to the post.

“Wow,” she wrote, “I had no idea of the store’s history or that (I deleted the name so as not to give away the answer) family is from our TINY town! I have to admit, to this day I don’t eat hamburger from anywhere but when I’m home and know it’s from Menges’.”

That is the neatest of all stuff.

All this goes beyond nostalgia. It ties into understanding our communities. Such understanding strengthens bonds without our towns and townships, and all that makes for a stronger York County, Pa.