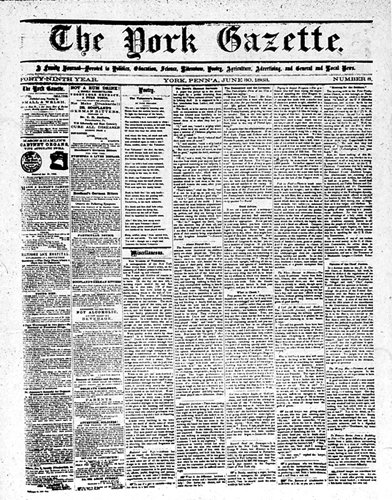 Owners of fugitives who sought freedom north of the Mason-Dixon Line in York County, Pa.,  and beyond advertised for their runaway slaves in the York Gazette and other weekly newspapers in the 50 years before the war began. In fact, members of Continental Congress started that practice – using the Pennsylvania Gazette, then published in York – during that legislative body’s nine-month stay in York County in 1777-78. Also of interest: York, Pa.’s, Civil War hospital: A master’s thesis waiting to be written.

And he’s also a grad student at West Virginia University and a native of York County.

And he’s working on a fascinating project – where to put a historic marker observing Prigg v. Pennsylvania, a landmark U.S. Supreme Court case. It’s one of three such high court cases in York County history. Maybe yorktownsquare.com readers can help locate some sites.

Here’s a summary from my “Never to be Forgotten:”

“Margaret Morgan, the runaway, lives with her children in York County. Edward Prigg, an agent for her slave master, seizes her without securing his rights by the proper authorities. This violates the state law against kidnapping. Prigg is convicted and appeals his case to the Supreme Court. ” (For details, see: Prigg v. Pennsylvania early U.S. Supreme Court case with York County ties).

Here’s the original query from Joseph:

“I’ve recently done some work with Pennsylvania’s historic marker program and am working on a marker proposal for the Prigg v. Pennsylvania Supreme Court case, being that it was based on an incident occurring in York County. In my reading of the case and monographs on the case, I am unable to discern some key locations within the county that would be ideal for a marker location.

“I am wondering if you know where the Court of Quarter Sessions of York County would have met in 1839 when it initially found Prigg, the slave catcher, guilty of violating the state’s 1826 law? Additionally, it would be interesting to know where the African American woman Margaret Morgan was living when she was kidnapped in the county.”

“I want to emphasis what a contribution you’ll make with your work. Little is known.
Consider submitting your work to the scholarly journal now put out by the York County Heritage Trust. ”

And Joseph the researcher wrote back:

“My research on Prigg began before I ever knew anything about its connection with York–my eyes surely got big when I opened the Supreme Court decision and saw York County in the first few lines. York has some great history… .”