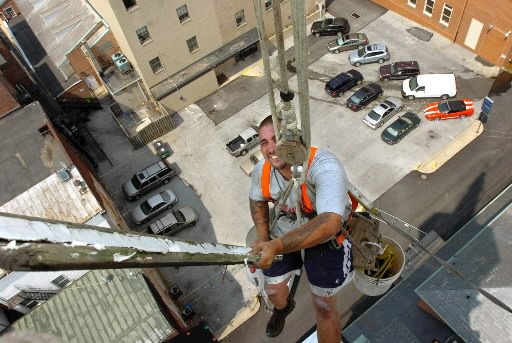 A steeplejack works on the tall tower of York’s Christ Lutheran Church in York during restoration in 2006. The steeple’s shadow is cast to the right. (See photo of tower’s interior below.) The church is celebrating its 275th anniversary this year, although one researcher dates the founding of the congregation about a decade later. Background posts: Christ Lutheran is oldest York church – but how old? and The organ: ‘It is a whole orchestra in itself’.

York’s Christ Church was the first Lutheran congregation on the Susquehanna’s west bank.
The congregation traces its founding date to Sept. 23, 1733, the moment the first baptism was recorded in official church paperwork.
A register contains baptisms performed by the Rev. John Casper Stoever in 1733. Thus, the congregation is celebrating a key birthday.
Not necessarily so, says Charles H. Glatfelter, professor emeritus of history at Gettysburg College… . 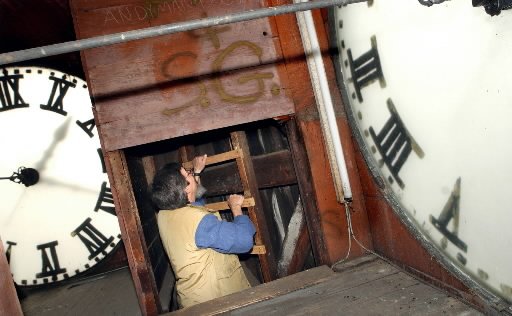 Sexton Ted Weikert climbs past the clock faces in the tower of Christ Lutheran Church in York in 2002. Background post: Birds gone, rehabbed steeple stands .
In a letter this week, he argued three points:

– The first baptism was performed in Lancaster, not York.
– Stoever did not cross the river until 1735.
– The congregation did not exist until there was a town, sometime after 1741.

Glatfelter, with tongue in cheek, says he wants to pursue another direction about the church’s founding.
” … John Casper Stoever could have had access to a helicopter in September 1733, which permitted him to baptize in Lancaster in early morning or late afternoon, visiting the banks of the Codorus about high noon,” he wrote.
Here are some less disputed facts, written by York Daily Record/Sunday News religion writer Melissa Nann Burke, based on church records and Glatfelter’s “York County Lutherans”:

– The Lutherans had applied for a lot in the newly laid-out town of York by 1743.
– For about a century, Christ Church was the only Lutheran congregation in York, and for many years, the largest congregation of any York denomination.
– Its pastors supplied pulpits and help form other area congregations in the county and provided leadership at the seminary and the college in Gettysburg.
– In 1744, a log building was erected – the first school building west of the Susquehanna.
– A stone building replaced it in 1760, and two bells from that steeple still call people to worship at Christ Church. The congregation has also preserved the original German chalice from the 1760 church.
– Lititz’s David Tannenberg last organ was commissioned by the congregation with a bequeathment by the late Barbara Schmidt. The 1804 organ was kept in playing condition until 1945 when it was given to the Historical Society of York County. Organists regularly play the instrument today in the York County Heritage Trust’s reception hall.
– The present South George Street building dates from 1812, dedicated May 1, 1814. English services began in 1820.
– The church’s administration and education buildings were added in 1965. In recent years, a restoration project rehabbed the steeple.
– At least three Lutheran congregations are descendants of Christ Church, including Zion Lutheran in Manchester Township and St. Paul Lutheran Church in York.
– Today, the congregation is comprised of nearly 1,000 members who worship in a classic Lutheran style.