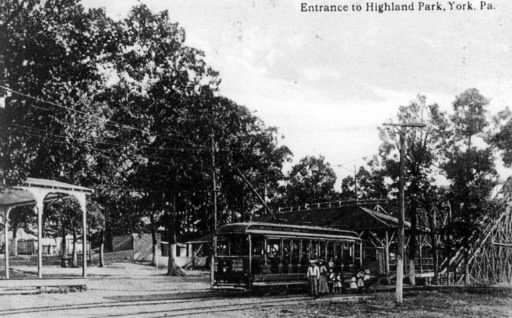 The former Highland Park site, a destination point for trolley riders from across York County, is now a West Manchester Township quarry. Here, a trolley waits at the park’s entrance. Background post: A village center that up and moved.

Did you know part of the impetus for the electrification of America’s trolleys rested with the tendency of horses to become diseased from strain in getting the heavy cars started?
And a single horse deposited 10 to 20 pounds of manure on the street each day.The streets were generally muddy in inclement weather anyway – which fueled ridership – but their condition was not helped by animal excrement.
And trolleys drew their names from the trolley wheel that rolled along the line once the systems were electrified… .

And the trademark trolley bell was located beneath each car, activated by a foot pedal.
These interesting insights came from a paper prepared for the Y’sJ’s, a group of community statesmen.
Dan Meckley, the author, is a former corporate chief executive officer and a force behind several York County historical institutions and events – the Agricultural and Industrial Museum, the Murals of York and the county’s mega 250th-anniversary observance in 1999.
And he’s a student of local history as well. His work on the Codorus Creek is one example.
Here are some additional interesting details from Dan’s work:
— Horse-drawn trolleys started running on York’s streets in September 1887 – the year the borough became a city.
— The first line reached from Centre Square to Belvedere. The square became the hub of the county’s trolley system that eventually reached from York Haven to Littlestown and from Windsor-Bittersville to Dover.
— Samuel S. Lewis, later Pennsylvania’s lieutenant governor, was one of the school boys who drove a helper horse to assist cars up the East Market Street grade.
— In 1888, a double-decker car, drawn by four horses, operated on South George Street.
— The interval between cars halting at a particular stop was known as headway. A trolley’s fender was called a lifeguard or cowcatcher or providence.
— A local company, the C.I. Earl company, made trolley receivers that coiled rope use to pull down the trolley pole, the stick that was used to push the trolley wheel against the overheated electric wire.
— York’s trolley system was electrified in the 1890s as were such systems everywhere in America.
— Instead of using turntables or Ys to turn a trolley around, here’s what happened: “At the end of the run they changed trolley poles, flipped over the “walkover” seats, raised and lowered the “cowcatchers,” and shifted the break lever, the speed controller lever and the current direction key to the front end of the car.”
(Photos courtesy of “West Manchester Township, 200th Celebration”)