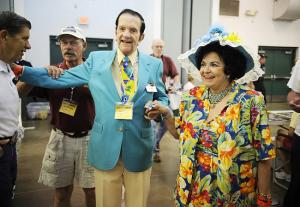 Wait. Did we ever dress like that? Well, Bud and Barbara Faubel still do. The Chambersburg couple make an appearance at Musclecar Madness at the York Expo Center on Friday. The Faubels displayed cars at the show, which concluded Saturday.Bud Faubel was a bit of a legend in drag racing circles in the 1960s and 60 years later,  brought two cars to the show. (See photo below and additional photos at Musclecar Madness returns.) The annual muscle car event pays homage to the U.S. 30 Drag-O-Way, which operated for years using the York Airport runway. See photos, a video, audio memories and all kinds of stuff about the airport/dragway. Also of interest: Check out these photos and stories in yorktownsquare.com’s Wheels of York category.

Karl L. Steger is director of the venerable Brodbecks Bank, a surviving band among many such musical groups performing in small towns across York County a century ago.

He wrote yorktownsquare.com in preparation for a presentation in September on the topic of Community Bands in September.

“I have some knowledge of the current situation since I am the director of Brodbecks Band. As such I have caught bits and pieces about some of the no-longer-existent bands such as Bon Air, Potosi, Glen Rock and Green Ridge,” he wrote.

He asked about printed stories and photographs that would help his work and wondered if the York County Heritage Trust Archives would be helpful.

I wrote back that I thought the Trust’s archives would have files on bands and definitely files on communities in which the old bands operated.

If you can help Karl, send him an email, karlsteger@aol.com, with information.

The Great Race: 1915: It no doubt was, but are those Yorkers in this magnificent photo on Shorpy.com? Maybe someone knows. Here’s the caption: “York, Pa., auto races — start of Washington, D.C., cars.” I love this disclaimer: “Please ignore the mold.”

Forum of the day: The U.S. presidential race is heating up, Exchangers are discussing claims by local politicos. 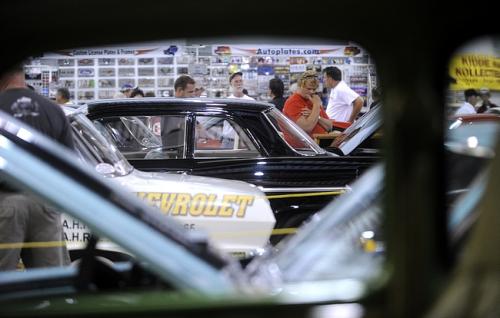