If you want to see the Murals of York, Pa., up close … 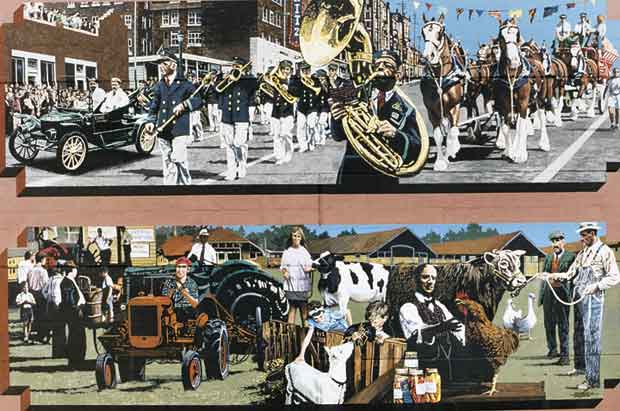 This is a section of East Market Street’s York Fair panel, the widest of the murals. If you can’t go on the walking tour of the Murals of York, see this colorful spread of all 18 panels.

You’ll get a chance to hear first hand about those colorful Murals of York by attending free tours starting Saturdays through Labor Day.
I’ve used these 18 large-scale murals and more than a dozen mini-murals regularly as illustrations in this blog and in the York Daily Record/Sunday News. They do a wonderful job of telling York County’s story – from wars to everyday life and show how the community has advanced in including minorities as part of that narrative. (See below.)
Representatives of the York County Heritage Trust, curator of the large-scale panels on the walls of buildings will conduct the tours… .

Tours will be available Tuesdays through Saturdays at 11a.m. and 2 p.m. They will depart from the York County Heritage Trust Gift Shop located behind the Colonial Court House on West Market Street.
Groups of 10 or more are asked to contact the Education Department at 846-6452 for more information.
Here’s my York Sunday News column, published on May 21, 2006, on the murals as an artifact of history:

Next year marks the 100th anniversary of York County historian George Prowell’s fat “History of York County, Pennsylvania.”
The massive book itself is an artifact of history, something that produces insight about early-20th century York County. It’s what’s largely missing in Prowell’s tome that says loads about the county.
The book contains 55 portraits, and all depict men. Men of power and prestige and accomplishment, to be sure, but all men. White men.
In a section called notable men of York County, all are white. There is no commensurate section on women.
The book lists notable lawyers. All white men.
And so it goes throughout.
Here and there, Prowell does mention black people. A section on slavery briefly profiles ex-slave-turned-businessman William C. Goodridge. As for women, the book covers the contributions of Mary C. Fisher and others who nursed wounded soldiers at York’s Civil War military hospital.
But it’s predominantly the story of men — particularly those who had formed York County’s power structure. That’s the way the county was run, and that’s the way history was done in those days.
Historians did not spend time detailing the dreams and accomplishments of women and minorities. Those men in power and the rest of the community did not demand more from them.
That was county life at the turn of the 20th century.
……….
A century later, another community artifact emerged. Or maybe we should say a colorful array of artifacts — the Murals of York.
Ten years ago, community leaders — the power structure — commissioned these outdoor murals to be painted on the walls of downtown buildings to boost tourism and community pride.
These panels do this — and more.
Studied as a set of 18, they include women and people of color functioning as a community. Compared to Prowell, it’s their inclusiveness that says much about the county.
Nine of the murals show minorities.
The Goodridge mural on West Market Street focuses on the freedman who became a prominent 19th-century shop and rail line proprietor.
Goodridge is a prominent and deserved mural theme.
But what hasn’t been heralded is how the artists wove minorities into scenes of everyday life in eight other panels.
One panel, East Market Street’s York Fair mural, features black men and women in several scenes across its wide expanse.
A South George Street mural, “The Children’s Home of York,” shows a progression of diversity — from the housing of white Civil War orphans to accommodation of a diverse clientele today.
Japanese-American weightlifter Tommy Kono lifts enormous barbells in another mural, “Muscletown USA.”
The Murals of York accomplished what Prowell failed to do. The initiative put a different face on the community than that of a white male.
Indeed, that is county life at the turn of the 21st century. ……….
Sometimes, wrenching moments force communities, regions or entire countries to outrun their treadmills.
Louisiana writer Walker Percy pointed out that the birth of poignant 20th-century Southern literature — William Faulkner, Flannery O’Connor, Robert Penn Warren and others — did not occur before the Civil War. It came only after the South experienced defeat and humiliation.
And C. Vann Woodward wrote that before Vietnam, Southerners were the only Americans to experience military defeat. While the rest of the smug country had the triumphal idea that it could accomplish anything, 20th-century Southern writers had a more accurate view of life that inspired their work and gave them something to say.
Prior to Prowell’s era, York County went through excruciating moments. For example, a battle-hardened Confederate division strutted through a passive county during the Civil War, a point of subsequent embarrassment and controversy. Yet, the post-Civil War era was a productive time with the founding of several institutions: York Hospital, the Children’s Home of York and the York Collegiate Institute, a forerunner of York College.
In the 20th century, two moments among many contributed to change.
By 1930, the influx of blacks to the factory-rich county had reached such numbers that York’s community had to respond. The Crispus Attucks Center formed to meet the black community’s growing social and recreational needs. Two segregated elementary schools were erected to answer black educational demands.
The county could not simply overlook the numbers and needs of these newcomers.
About 40 years later, race riots rocked York — resulting in the deaths of Lillie Belle Allen, a black woman visiting York, and Henry Schaad, a white police officer.
Following this low moment, blacks and whites jointly sought, and gained, a measure of community reform through a type of group civic therapy — the York Charrette.
York elected a woman mayor, a black woman as school director, and appointed a black police chief and black school superintendent. Crispus Attucks erected a badly needed new building.
Gradually, the Lafayette Club and many other white male bastions admitted women and black people.
Interestingly, York’s diverse murals did not stem from the race riot trials that started with impaneling a grand jury in June 2000. These cases ended within three years in the convictions of those who shot Allen and Schaad.
To be sure, three of the four panels painted after the district attorney swore in grand jurors included minorities. But a good half-dozen diverse murals were completed before prosecutors kicked off the investigations that consumed the community for months. ……….
“Civilization is a stream with banks,” historian Will Durant wrote. “The stream is often filled with blood from people killing, stealing and shouting.”
George Prowell kept his eyes on this stream.
On the banks, unnoticed, people build homes, raise children, sing songs, write poetry and whittle statues.
The true story of civilization, Durant argues, is what happened on the banks.
The backers and painters of the Murals of York largely looked toward the banks.
An examination of Prowell’s work and the murals as physical evidence provides clues into a community grappling with issues of race and growing as a result.
York’s colorful murals are more than just pretty paintings.
They show the community’s true colors. 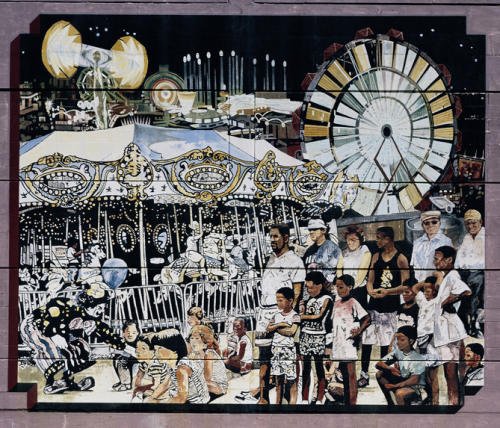 Another section of that York Fair Mural. This York Fair mural has shown deterioration over the years.