Reflecting on J.W. Gitt’s Gazette and Daily and journalism in York, Pa. 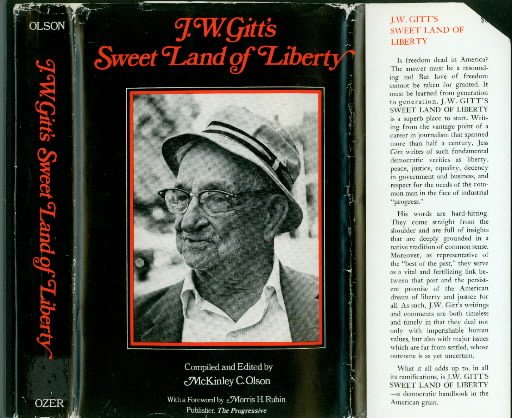 J.W. Gitt owned The Gazette and Daily in York, Pa., for 55 years. His left-leaning tabloid is remembered today for its against-the-grain look at conservative-to-moderate York County, Pa., particularly in the post-World War II era through his closure of the daily in 1970. The newspaper came back two weeks after Gitt’s retirement as the York Daily Record, no longer tied to a particular political ideology. In the 1960s, the newspaper recruited journalists who covered that turbulent decade in York and then furthered their careers, often with distinction, elsewhere in journalism and academia. One of those journalists was Alfred Hopkins (see below). This book, written by one of Gitt’s editors, is a collection of editorials from those years. It is out of print but can be found in used bookstores and online. Also of interest: York, Pa., newspaper’s founding date hard to pin down.

Over the years, many journalists from The Gazette and Daily have stopped by to talk about the days they worked at that feisty York newspaper under the ownership of J.W. Gitt.

I’ve spent many hours rolling microfilm from those days between 1915 and 1970 when the pretty-far-left-of-center Hanover resident ran the six-day-a-week morning newspaper that was nationally known for, well, being pretty far left of center.

Journalists and academics have found York County a fertile ground for journalism research because they could compare and contrast Gitt’s newspaper on the left to the competing York Dispatch on the right.

Alfred Hopkins stopped by earlier this year to reflect on the 1960s. The personable Hopkins is a writer, actor and teacher in South America. He traveled there in the late 1960s, submitting free-lance pieces to Gitt’s Gazette about life and politics in the southern hemisphere.

He’s also a blogger, and he put me in the welcomed but unaccustomed role of being the interviewee.

I’ve included his lightly edited interview of me below, thinking that it crosses enough York County journalism and history that it might interest readers.

“Journalism is a vocation or calling – not a job – and it implies a special commitment, demands a certain lifestyle and carries a vision of a higher purpose,” says Jim McClure, editor of a lively daily newspaper in York, Pennsylvania. Surrounded by Pennsylvania Dutch farming communities,  York was the capital of the United States of America for nine months in 1777.

“The York Daily Record” follows on the footsteps of the “York Gazette and Daily,” known nationally and internationally during the 1960s for questioning the Cold War, favoring civil rights and questioning the Vietnam War. Jaquematepress recently approached Mr. McClure to talk about the role of journalism in today’s troubled world.

Q. What brought you into the world of journalism?

Me: My story is similar to that of many journalists. I started in high school as a sports stringer. Then in college, I found myself hanging around the newspaper office more than the chemistry lab.  I saw early on that the work journalists do is important – in fact, crucial. I don’t think enough is made about calling. I’ve written before: Journalism is a vocation or calling – not a job – and it implies a special commitment, demands a certain lifestyle and carries a vision of a higher purpose. I guess that also answers why I’m still in this business.

Q. York appears to have a rich history of journalistic endeavor.

Me: I did not grow up in York County, but I came to know The Gazette and Daily starting on about my first day here more than 25 years ago. This was the predecessor newspaper to the York Daily Record. For 55 years in the 20th century, The Gazette and Daily was owned by Jess Gitt, a lawyer turned newspaperman who was viewed as part of the far left.

Is it true that he endorsed Henry Wallace’s presidential campaign?

Me: Yes. Gitt’s newspaper endorsed Henry Wallace in 1948, one of two dailies in the U.S. to do so. The other? The Communist Daily Worker. He was branded as a personal journalist by Jim Higgins, one of his former editors.  Higgins explained to Neiman Reports  that Gitt’s newspaper reflected “an image in the likeness of J. W. Gitt – his personality, character, temperament, interests, convictions, and intellectual stance.”

A sort of heritage…

Me: Indeed. The pluses and minuses of such an ownership at a newspaper 75 years after the heyday of personal journalism and the post-World War I advent of objective journalism are probably obvious. The notion is still out there that we’re way left of center at the Daily Record on our editorial pages – if not on all pages – because we happen to be in The Gazette and Daily’s lineage. We are more centrist in our views, endorsing on our editorial page, for example, Republican and Democratic U.S. presidential candidates since 1984.

Some observers have criticized the Gazette for refusing to publish advertisement from certain sources, or for not backing the Goldwater campaign. What is your opinion? Should a newspaper have the right to decide what advertisements to publish or to support or not political candidates?

Me: Taking the last part first, a newspaper – and its digital arms – have readers of all political stripes. So to serve those readers, it should offer commentary – we’re talking opinion pages here – crossing the political spectrum. It seems obvious that one political strain can’t be right all the time. There are strengths – and weaknesses – in all political ideologies. So it seems for a newspaper to be independent, editors should have the ability to pick the right solution, irrespective of political party expressing it. As for Goldwater advertising, what a collision of First Amendment rights! Gitt had the First Amendment right to refuse that advertising, which he exercised. But didn’t that fly in the face of his newspaper’s motto: ‘The news all the time without fear or favor, bias or prejudice?’

A great part of the Record’s news activity is digital. Could we talk about that process?  Is it convenient from the economic point of view, from the reader’s point of view, and what effect does it have on the role of the journalist?

Me: We are owned by Digital First Media. That doesn’t mean Print Last. It means that print – the newspaper – is handled at its time in the news production cycle. Print remains important. But one of the practices of being Digital First is to publish to the web, mobile and social media first and then you take that content and produce it in the newspaper. That serves more readers because then you provide content for those who seek it out right now, as well as those who want it with their morning coffee. The fact is that more readers are seeing a particular piece of content than ever before – when you put that content on all the digital platforms and in print. As for journalists in the York Daily Record newsroom, we now have a deadline every second, 24-7.

Censorship has been haunting journalism since the collection and dissemination of news began and the recent events in France with the brutal attack against Charlie Hebdo put it into the highlight once again. Should a newspaper or magazine publish anything it considers appropriate or should it take social, cultural and political sensitivities into consideration? When can a piece of news be considered slander or insult and when a genuine investigation into a situation or the activities of a person or persons? Do you perceive any form of pressure from government or corporations in terms of your practice of journalism?

Me: The censorship piece that we interact with most is a type of indirect censorship. That is, we often face undue resistance by local and state government when it comes to delivering information. We must resort to the Freedom of Information Act or the Pennsylvania Right to Know Act, which have been notoriously weak for decades. Pennsylvania has all these small municipalities – 72 of them in York County – so some are not equipped to freely deliver what they’re charged to do. Not that they’re inclined that way anyway. So we receive little pressure from government against publishing content. Government officials sometimes just don’t make it easy for us to gather the content in the first place.

Related to the problem of censorship is the growing competition with the digital media–which can respond to political interests, corporations or individuals and as yet is subject to very little control. Should there be some form of control concerning the propagation of lies or distortions of the truth, manipulation of graphic material (for example, use of photographs of a protest in one country to describe the situation in another) and what effect might that have on the democratic process?

Me: I can tell you as a news organization that is fully involved in digital, the best practices of journalism remain in play. But we must be vigilant and constantly assess these practices. The news industry has installed various tools and technologies over the years that would allow some to cut corners on journalism ethics – the social media tool Twitter is one example – but the best news organizations have adapted and must continue to do so.

How do you see the future of journalism in York, in the country or in the world? How will we be communicating in 3050?

Me: Well, we’re simply trying to figure out 2020. That’s a difficult enough target to figure out, but we’re thinking that video as a form of storytelling may predominate at that point.

Background from Alfred Hopkins: Mr. McClure is chairman of the York County Heritage Trust’s Publications Committee and helps edit the Trust’s annual scholarly publication,“The Journal of York Heritage,” and other Trust publications. For example, Mary Hamilton’s“Rising From The Wilderness.” He has also served as general editor of the three-volume“250th Chronicles,” published in conjunction with the 250th anniversary of York County in 1999. 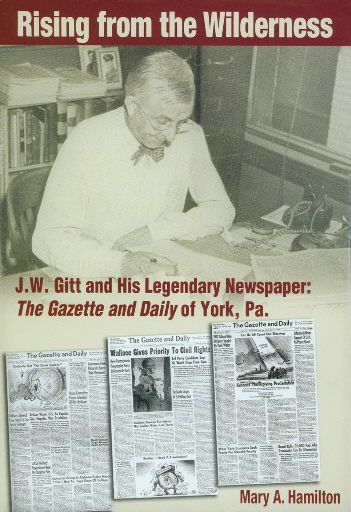