Red Lion’s residents worked with their hands for years, but did they ever mine coal? 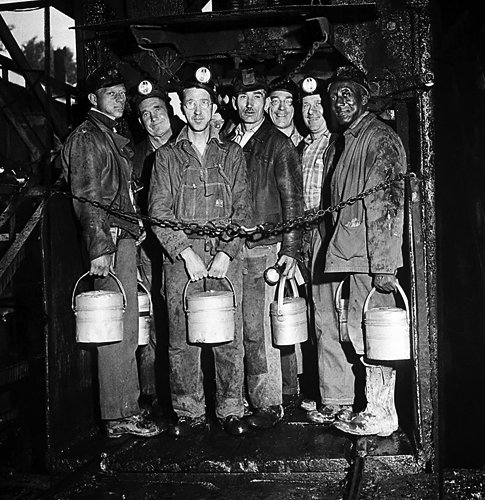 This photograph, with the caption “soft coal miners return to work, Red Lion, PA” presented a short-term mystery and the question: Were there ever coal mines near Red Lion? Also of interest: Far from Red Lion, Pa., this Red Lion Inn stands in Stockbridge, Mass.

So the history mystery investigation started with an email from Travis Brooks, tbjbrooks@comcast.net

“I’m an 18 year old farmboy from Maryland, and an amateur historian. My family is from western PA and West Virginia, where they worked in the coal fields of those areas. Many of them died underground. Because of my family’s connection with this, I have always found mining to be an interesting area of history. A while ago, I came across a photo from June 1st, 1946 of coal miners near Red Lion, PA in a shaft cage before descending into the Earth. It’s a very clear photo and you can see the faces of most of the men in the cage.”

Travis’ goal is to ID the men in the photo.

“Everyone of them had a story, maybe children, and only they know who went to work one day and never came back home when the whistle blew,” he wrote.

I know Red Lion workers rolled cigars and made furniture and all other sorts of things. But they never mined coal. In fact, York County is not blessed with that resource.

We’re gone underground to mine iron ore and limestone. But there’s no significant coal within the borders of York County.

“Travis, these miners might be from Red Lion but the coal mine isn’t… . What do you have that show that they are from Red Lion or that this mining is near Red Lion? …Red Lion, Pa., right?”

The young researcher check that out.

“Mr. McClure, my mistake. The photo’s caption labelled it as “soft coal miners return to work, Red Lion, PA”. Upon further research, they were probably workers at the Red Lion MINE, near Perry Township in Fayette County, where my family is ironically from. Sorry for the inconvenience!”

“Glad to see a young man like yourself is so interested in history. Hope you make it to Red Lion, Pa., someday!

And he wrote back:

“A really interesting tidbit on the photo, June 1st, 1946, is that it was the day that the Western Pennsylvania coal miner strike, headed by John Lewis and deemed a ‘Threat to National Security’ by Harry Truman, effectively ended and the miners went back to work. These men were probably on strike just a few days before!”

I predict a bright future for Travis Brooks.